…they were eating and drinking…

Home/…they were eating and drinking…

…they were eating and drinking… 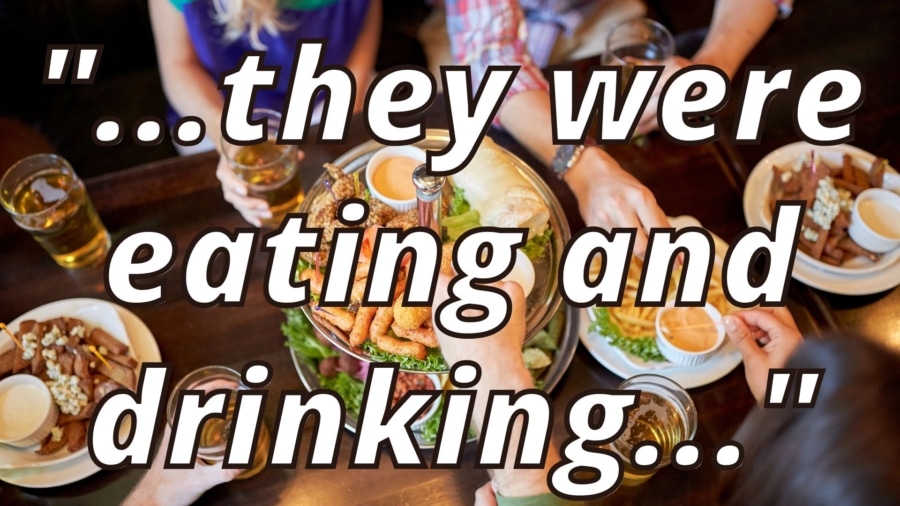 Matthew 24:37 says, "But as the days of Noah, so also will be the coming of the son of man. For as in the days before the flood they were eating, drinking, marrying and giving in marriage." Let me ask you a question. What is wrong with those activities? This is not self-indulgence. They were eating. They were drinking. They were marrying. What's wrong with that? Now, the point here is not how nasty they were, although no doubt they're going to be nasty. In the days before the flood they were really nasty people, but Jesus is making a point here. It is not how sinful they were, but how deluded they were to think that everything was going to go on as it always had. Peter said in 2nd Peter chapter 3, "...scoffers are going to come with their scoffing, saying, 'Where is the promise of his coming forever since the fathers fell asleep? All things continue as they were until this present time.'" The people in Noah's time thought time was going to go on forever, and it was not. And then what happened? "...until the day that Noah entered the ark." By the way, who closed the door? God closed the door. God sealed the family in. That's a picture of us being placed in Christ and sealed in Christ. When judgment falls on the earth, we rise up above the judgment. This is another analogy of the rapture of the church.Matthew 24:39. "And they did not know." Could they have known? They should have known. Noah was preaching for 120 years and they did not know "until the flood came and took them all away. So also will be the coming of the son of man." Let me ask you a question in Matthew 24:39 who got taken away? Unbelievers. What does "took away" mean? They died in the flood. Read the parables and ask yourself how how if at all they can be applied to the church. They cannot be applied to the church. Matthew 24:40 says, "then two men will be in the field. One will be taken and the other left." Taken in the rapture? And the other one is left? That's not what Jesus is teaching. "Two women will be grinding at the mill. One will be taken, and the other left." And these are taught as if they refer to the Rapture. But remember, Jesus is not talking to the church. In Matthew 24 and 25, He's talking to Israel. And "the taken" is based on those that were "taken" at the flood, and that were "taken away" in judgment. The ones who are taken here in Matthew 24:40-41 are unbelievers at the end of the tribulation period when Jesus Christ returns with the armies of Heaven. They are taken away in judgment They are removed from the Earth. They are killed in the Battle of Armageddon. Matthew 24:42 says, "Watch. Therefore, for you do not know when our Lord is coming." In other words, be vigilant. Be alert. "...Know this that if the master of the house had known what hour the thief would come he would have watched and not allowed. His house could be broken." If you knew that tonight at 2:30 in the morning a thief was going to attack your house, what would you do? You wouldn't go to sleep. You'd be armed and ready, and you'd be waiting for him. You maybe even leave the front door unlocked. What is the point? The point is, you "don't know the hour" and therefore you have to watch all the time. Be vigilant. Matthew 24:44 says, "Therefore, you also be ready for the son of man is coming at an hour when you are not expecting." How do you get ready if you were living in this time; how do you get ready? Number one, you better "believe" (Acts 16:31) that's the first thing. You better make sure that you are a child of God by faith in Jesus Christ. And then number two, you make sure that you're in the Word and in the will of God doing what he's called you (2Pe 3:18). Do stay alert. Stay vigilant. You're looking and you're waiting.