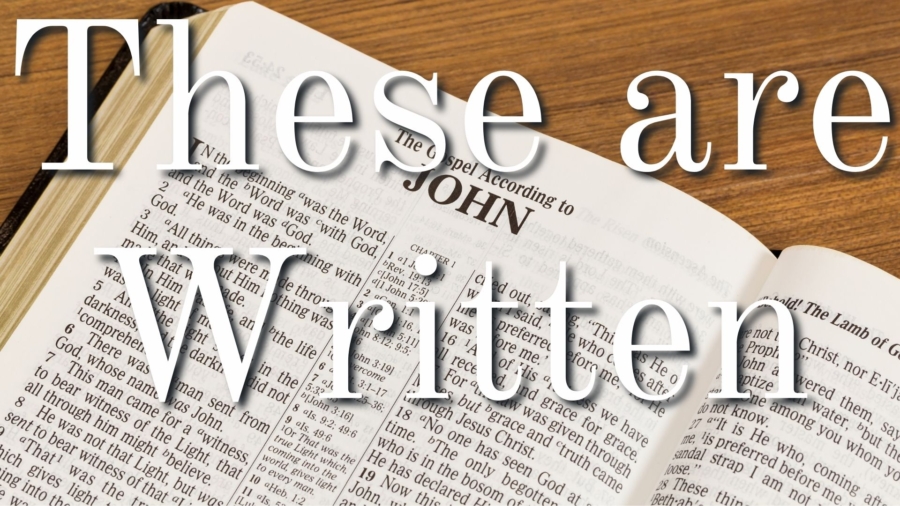 John's gospel was written with the primary purpose of leading people into a saving knowledge of Jesus and through faith, introducing them into the family of God. But he tells us here in John Chapter 20 why he wrote what he wrote in this book, and it's built around a word that we're going to see in verse 29. This is where Thomas, of course, meets with the Risen Lord, and he realizes that he's been raised from the dead, and Jesus tells him to reach his hand and touch His wounds and recognize that it's him. And Thomas answered and said to him, My Lord, and my God, declaring both the humanity and the deity of Jesus Christ. And Jesus said to him, Thomas, because you have seen me, you have believed. Blessed is those who have not seen and yet have believed. And that includes every one of us here tonight. It tells me that we have a blessing that none of those who traveled with him will ever have. We often think if only we could have been there, if we could have observed the miracles, if we could have heard the teaching how great our faith would have been, how much more strengthened it would have been, because we've never seen that Jesus is telling Thomas that there's a blessing for those who have never seen that he and the other apostles would never know. Then he says in verse 30, “Truly, Jesus did many other signs.” I want you to notice the word sign because that is a favorite word of John's gospel. There are three different words you can use for miracles one of the words is a word that is often translated wonder, and it talks about the effect of the miracle on the people. They're astounded, they're amazed, they're excited. They're standing in awe of what has happened. That's one of the words that is used. Another word that is often used is just the word miracle, and it speaks about some magnificent work. It talks more about the effect of it. For example, a blind man who's given sight or the dead raised from the grave. And it is speaking more of the effect and the power of the miracle. And then we have the word sign. The word sign is John's favorite word for the works of Jesus Christ. And the reason he uses it is because a sign tells you something about the person who does the work. It's not so much about its effect on the people or the change that it makes in someone's life. It's about the person who performs the work. It's a sign. It has a spiritual meaning and a spiritual lesson behind it. So truly, Jesus did many other signs in the presence of his disciples which are not written in this book. Verse 31 says, “But these are written that you may believe that Jesus is the Christ Son of God. And that believing you may have life in His name.” John's Gospel is an evangelistic gospel.