Home/The Voice of the Archangel 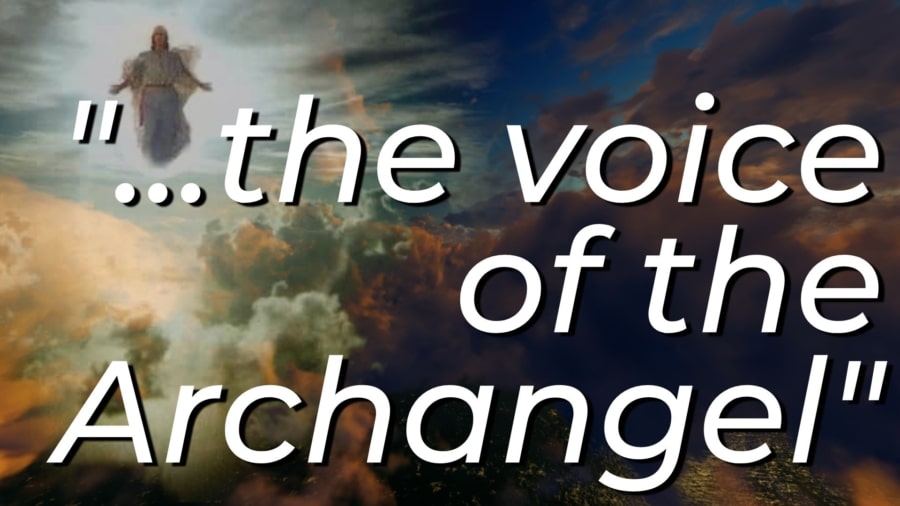 The Apostle Paul wrote 1st Thessalonians for the purpose of comforting them, because they (like many Christians today) misunderstand about those who have died in Christ (see 1st Thessalonians 4:13 and 4:18). Paul refers to the “dead in Christ” (1st Thessalonians 4:16) also as “those who sleep in Jesus” (see 1st Thessalonians 4:14). Somehow the Thessalonians had the impression that these people (dead in Christ) were missing out so Paul writes to comfort them. 1st Thessalonians 4:13 says, “Regarding those who have fallen sleep, lest you sorrow, as those who have no hope.” Comfort to believers always comes from a very real and certain “hope.” When the Bible talks about “hope,” it never uses hope in an uncertain way. Modern English is different. We say, “I hope tomorrow is a nice day.” That doesn't give us any certainty. That's just an empty hope. When the Bible talks about “hope,” it means an absolute rock-solid foundation for confidence and assurance. Paul says that we have hope. The key to taking advantage of the plan of God in hope, here in 1st Thessalonians 4:14, is “…if we believe that Jesus died and rose again.” Saving faith and Biblical faith is in a Person and a Work. The Person is the Lord Jesus Christ. And His work is the cross. So “if we believe that Jesus died and rose again, we have a confidence that God will bring with Him those who sleep in Jesus.” When He comes, they (“those who sleep in Jesus) will come. 1st Thessalonians 4:15 continues, “For this we say to you by the Word of the Lord that we who are alive and remain until the coming of the Lord, we will by no means proceed those who are asleep.” In other words, we will not enter into the heavenly state before them. We don't have an advantage by being alive when Christ comes. As a matter of fact, He's going to show us that they're the ones who have the advantage. We tend to look at this in a backward fashion. As Christians, regarding believers who have died, we say “what a tragedy;” this perhaps referring to a young man or a young woman who die at the age of 17 or 18. We bemoan that they never had the opportunity to live. However, the Christian perspective could be that dying is a marvelous thing. The fact that they are now in the presence of the Lord, they no longer have an opportunity to mess up. The dead in Christ don't have all of the faults and flaws and failures that we tend to stack up in our lifetime. And so, we're do not have an advantage over them. 1st Thessalonians 4:16, describes the rapture of the church. It says, “The Lord himself will descend from heaven with a shout with the voice of the archangel and the trumpet of God. The dead in Christ will rise first, and we who are alive and remain will be caught up together with them to meet the in the clouds, to meet the Lord in the air. And thus we shall always be with the Lord.” So here's the scenario. Some believers are going to be living on the Earth and many will have died. Someday, “the Lord will descend from heaven with a shout.” What that shout will be we’re not told, but in Revelation 4:1, John, hears is a shout, “Come up here!” and that shout comes with a voice like a trumpet. As well, 1st Thessalonians 4:16 says that the shout is accompanied by “…the voice of the Archangel.” The Archangel is Michael. And Michael is significant at the rapture of the church because he's the commander of the armies in heaven for a particular purpose. What is that particular purpose? The defense of Israel. Isn’t it interesting that when the Lord calls the Church out of this earth, that Michael is on hand? It’s because of his particular role in the defense of true Israel. That's significant. Revelation 22:20-21 says, “He who testifies to these things says, ‘Surely I am coming quickly. Amen. Even so, come, Lord Jesus.’ The grace of our Lord Jesus Christ. Be with you all. Amen.”