Home/The Gospel Must First Be Preached to All the Nations 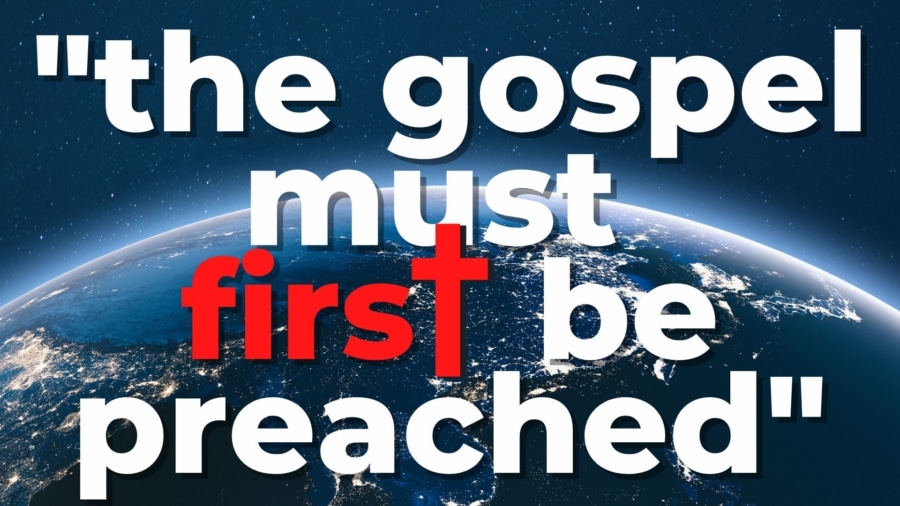 There are four waves of world-wide evangelism during the tribulation. Rev 7:1-8 says, “After these things, I saw four angels standing at the four corners of the earth holding the four winds of the earth. The wings should not blow on the earth, on the sea, or on any tree…” In other words, they're withholding judgment. “…Then I saw another angel ascending from the east, having to kill the living God. And he cried with a loud voice. To the four angels to whom it was granted to harm the earth and the sea, saying, ‘Do not harm the earth, the sea or the trees until we have seen all the servants have our God on their foreheads’. And I heard the number of those who were sealed. 144,000 of all the tribes of the children of Israel. There are from the tribes of Israel….” And then he gives in verses five through eight, a list of 12,000 from each of these tribes. So what see here after the rapture of the church takes place. How many believers are taken in the Rapture? All. How many believers are left on the earth? None. None for a moment of time. God opens the eyes of 144,000 Jewish evangelists, which begins the first wave of evangelism. They're not the only ones who are saved. They're the ones who begin evangelism throughout the world. These are the ones who are provoked They're provoked by what they have seen that the Gentiles did. That should have been their privilege. The second wave you'll notice Rev 7:9 says, “After these things, I looked and behold a great multitude that no one could number of all nations, tribes, peoples and tongues standing before the throne, before the Lord clothed with white robes and with palm branches in their hands, crying out with a loud voice, saying, ‘Salvation belongs to our God who sits on the throne unto the Lamb.’” Who are these people? Converts of the 144,000 to all these people are not only going to believe, but they're also going to be leading other people to a saving knowledge of Jesus Christ. Then we go to Revelation Chapter 11. We have the third wave of evangelism. These are the two witnesses. I take them to be Moses and Elijah. Revelation 11:3 says, I will give power to my two witnesses. “…and they will prophesy for 1260 days.” How long is that? Three and a half years. When does their ministry begin? Mid-tribulation. What else is going on at that time? The abomination of desolation and so they're going to have their ministry. They're going to be killed for a short period of time and they're going to be raised up. The final wave of evangelism is in Revelation 13:6 which says, “Then I saw another angel flying in the midst of heaven, having the everlasting gospel to preach to those who dwell on the earth, to every nation, tribe, tongue, and people.” There are going to be four waves of evangelism that will completely circle the earth in the tribulation period.