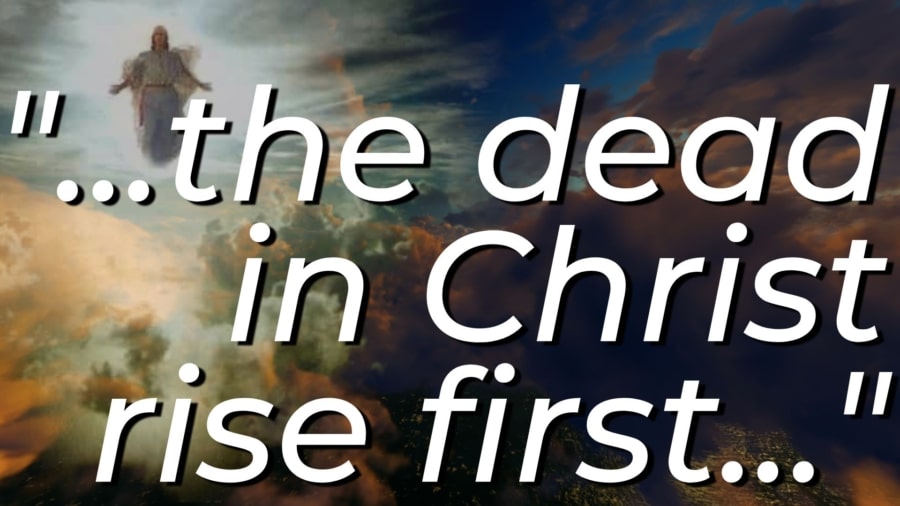 In 1st Thessalonians 4:13, the first thing we need to determine who is "the sleeper." 1Th 4:13 says, "I don't want you to be ignorant concerning those who have fallen asleep." Who are they? Dead believers in Christ. The term "in Christ" is important. Church age believers who have died. The verse says that, "...we should not be concerned..." because notice 1st Thessalonians 4:14, "God will bring with Him with Christ those who sleep in Jesus." So this tells us that when the Lord Jesus Christ comes for His church, who's coming with Him? Those believers who have departed this life and gone into His presence. Remember what Paul says in 2nd Corinthians 5? "Absent from the body face to face with the Lord." When you close your eyes in death, you open your eyes in heaven. We grieve for those who have died. If they're believers, they're rejoicing. They're not weeping. They have made it into their eternal reward. 1st Thessalonians 4:15 says, "For this we say to you by the Word of the Lord that we who are alive and remain will until the coming of the Lord will by no means precede those who sleep. The dead in Christ "precede" those alive. We're not going to go ahead of them. We're not going to leave them behind. 1st Thessalonians 4:16 says, "For the Lord himself will descend from heaven with a shout with the voice of the archangel, the trumpet of God, and the dead in Christ will rise first." How can the believers who have died both be coming with Him and rising from the ground at the same time? The body comes up from the tomb. The spirit comes down with the Lord and is reunited with the body.1st Thessalonians 4:16 continues, "Then we who are alive and remain, shall be caught up." The Greek for this word is "harpazo" and the Latin is "raptus" from which we get the English "rapture." All three words have the same meaning: "to be snatched, to be seized by force, to be picked up bodily and carried away." There are at least three biblical uses and illustrations of the rapture of the church: 1) Philip Acts 8:39, 2) Paul 2Co 12:1-4, 3) Jesus Christ Rev 12:5. An intriguing example of the rapture, though it doesn't use the word "harpazo" is found in Revelation 4:1 that is the Apostle John in Revelation when he hears a voice. "It was a voice of Him who spoke to me that sounded like a trumpet. And He said, 'Come up here.'" And that's the last mention of the church in the Book of Revelation until chapter 19, because the rest of it has to do with the tribulation, and then the church is not on earth. Note: This video contains artwork from a DVD created by Pat Marvenko Smith at RevelationIllustrated.com.