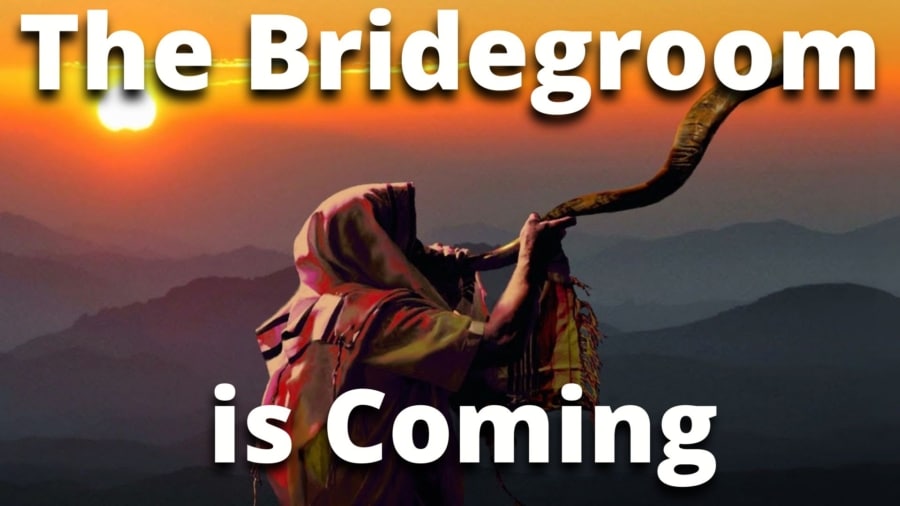 In Matthew 25:1 “Then” is our keyword. Then when? Then after the second coming of Jesus Christ. Matthew 25:1 says, “Then the kingdom of Heaven shall be like unto ten virgins who took their lamps and went out to meet the bridegroom.” Now, what distinguishes the bridegroom? He's one getting married, and he has a bride. Okay, keep that in mind. It continues, “Five of them were wise and five were foolish.” What is the beginning of wisdom? The fear of the Lord. How do we translate the fear of the Lord into one word? Faith. “ Those who are foolish took their lamps and they took no oil. But the wise took oil in their vessels with their lamps.” We know that oil is a picture of something in Scripture. What is oil? A picture of the Holy Spirit. The parable continues, “While the bridegroom was delayed. They all slumbered.” The problem here is not that they slumbered and slept. “And at midnight a cry was heard. Behold, the bridegroom is coming.” This is all according to the ancient Jewish customs of marriage. They never told the bridal company, nor friends when the bridegroom would come because they never knew what time the bridegroom chose or when he would come. The friends of the bridegroom would be waiting. What we would call the best man and his company were waiting. The bride was in her home waiting. She never knew when he was going to come because it was to be a surprise, because there is an element that is included in surprise. And so the bride herself is sleeping and when he comes and the friend of the bridegroom shouts. She runs out with her hope chest. This is where the idea came from. She would have her things packed in readiness, and when the bridegroom came, the shout was given. She would run out to meet him. Can you see here the parallel to the rapture of the church? And they would go to a place prepared where she would then adorn herself. Sound like Revelation, right? “It was given to be adorned.” You remember? And then she and the bridegroom would come to the place of the wedding feast. The parable continues, “Then all those virgins arose and trimmed their lamps.” They all slept. They all arose. And they all trimmed their lamps. Matthew 25:8 says, “And the foolish said to the wise, ‘Give us some of your oil, for our lamps are gone out.’ The wise answer and said ‘No, lest there should not be enough for us and you.’” “They say, ‘Rather, go to those who sell and buy for yourselves.’ And while they went to buy the bridegroom came those who were ready went in with him to the wedding.’ The door was shut afterwards. The other virgins came also a saying, ‘Lord, Lord, open to us.’ But he answered and said, ‘Assuredly, I don't know you.’” When Jesus Christ, a picture of The Bridegroom here, says, “I know you not.” That means He never knew you. You were never one of His. You are not a believer. We're talking here about unbelievers. Jesus is illustrating the danger of His return to those who never had the oil, of the anointing of the Spirit of God. The parable ends with, “Watch therefore, for, you know, either the day or the hour in which the Son of Man is coming.” What is the first step to watching for His coming? You got to believe in Jesus! Jesus is talking here to his disciples. But there were always others that were gathered around Him. Therefore, he knew that this was going to be recorded and passed down through the ages. Jesus, by the way, never spoke only to those in his presence. Everything we have recorded; He spoke with the knowledge as omniscient God that it would be recorded for posterity. So the question would be ask how then can we refer to unbelievers as virgins? I'm not going to give you the number of times, but get yourself a good, strong concordance and go look at it and find out how many times the nation of Israel was referred to as a virgin. You find the phrase “the virgin daughter of Jerusalem.” That was a very common way in the prophets of referring to the Jewish people. So the virgin here is used by the wise of believers, AND the foolish of unbelievers. And once again, Matthew 24 and 25 is written to the Jewish nation. Jesus is speaking to the Jews. This is Jesus’ final message to the Jewish nation. The five foolish virgins are not unfaithful believers, but UNBELIEVERS – Jews that rejected Him.