Home/Seven Sayings of Love from the Cross 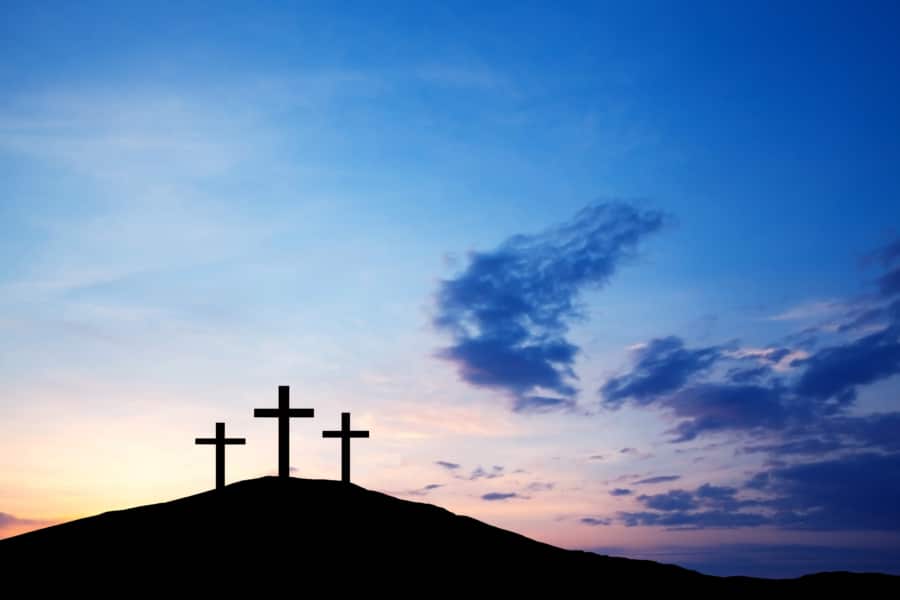 All seven of Jesus’ last words on the cross are anticipated in some 22. It's quite interesting when Jesus cried out on the cross, “My God, my God, why have you forsaken me?” He was pointing us to read that Psalm. And if you go to Psalm 22, you can see that while the exact statements of these seven sayings are not in the Psalm, you find the elements behind the things that Jesus stated. So, the first statement was a plea for forgiveness in Luke 23:34. You'll remember Jesus said, “Father, forgive them. They know not what they do.” And it's important to recognize that each one of these sayings is an expression of the love of God. God has a love for all us sinners. And that was expressed by Jesus in his first saying on the cross. The second saying on the cross is in Luke 23:43 is the promise of salvation. It's very interesting that right after He asked the Father to forgive, He promises eternal life to the thief on the cross Jesus told the thief, “Today, you will be with Me in paradise.” And this expresses the love of God to those who come to Him in humble faith. The third statement we found in John 19:25-27, and this was the provision of love when Jesus looked down and saw Mary and John standing at the foot of the cross. He said, “Woman, behold your son.” And to John, he said, “Behold your mother.” And here we see the love of God for family. And He was providing for His mother. What an amazing provision this was for the disciple, John. The fourth saying we find in Matthew 27:46 and this is the perplexity of abandonment. And you'll remember Jesus screamed out here the first verse of Psalm 22, “My God, my God, why have you forsaken me?” And here we see that the love of God is costly. We say that the love of God for mankind cost everything. It cost the Father His Son. It costs Christ, the judgment on the cross. So, the Father and the Holy Spirit turned away from Him while He was bearing our sin. And that's why He cried out twice. In the fifth saying, we see the plea for water in John 19:28. Jesus said, “I thirst.” I believe that this plea goes way beyond just simple need for water or human thirst. I believe it expresses thirst, number one, to be restored to fellowship with the Father. I believe that it also expresses thirst to see men and women come to a saving knowledge of Him to enter the family of God. He asked for a drink and what did they give Him? Vinegar. And you'll remember that in that passage there in John 19:28, it says that “Jesus, knowing that all things had been fulfilled in order, that the Scripture might be fulfilled, said I thirst”. So, the whole while Jesus was on the cross, He was meditating on the Scriptures. So, all of this was a fulfillment of scripture. That brings us to the proclamation of victory in John 19:30 is probably the best known of the sayings. And of course, we would say the most important when Jesus said, “It is finished.” He used the Greek word tetelestai, from which means “to be fulfilled or completed.” But the interesting thing about tetelestai in that form, the perfect tense, means the debt was paid in the past with the result that the results go on forever. So, the debt is paid. The consequences, the result goes on forever. When you had a bill in the ancient Roman world and you paid that bill off, they would write across the bill the word tetelestai. He paid the debt for our sin and accomplished our salvation. The work of salvation was done. And I want you to think about something very special here. The work of your and my salvation was finished before Jesus died physically. What did it take for Christ to purchase eternal life for us? It was His spiritual death being separated from the Father and the Spirit. And once that had been accomplished, and Jesus had been judged for the sins of the world, it was finished.His physical death was not something forced on Him or imposed on Him. It was something that He did Himself. He laid His life down. And that leads us to the last statement of Jesus. Luke 23:46 says, “And when Jesus cried out with a loud voice, he said, Father, into your hands. I commit My spirit.” This is a presentation of trust. Where did Jesus commit His spirit? “Into Thy hands.” You know something interesting? That's exactly where He has committed your soul and mine as well. And what He told the disciples in John Chapter ten, after He said, “I am the good Shepherd and I lay down My life for the sheep,” He said, “My Father is greater than all and no one is able to snatch them out of My Father's hand.”