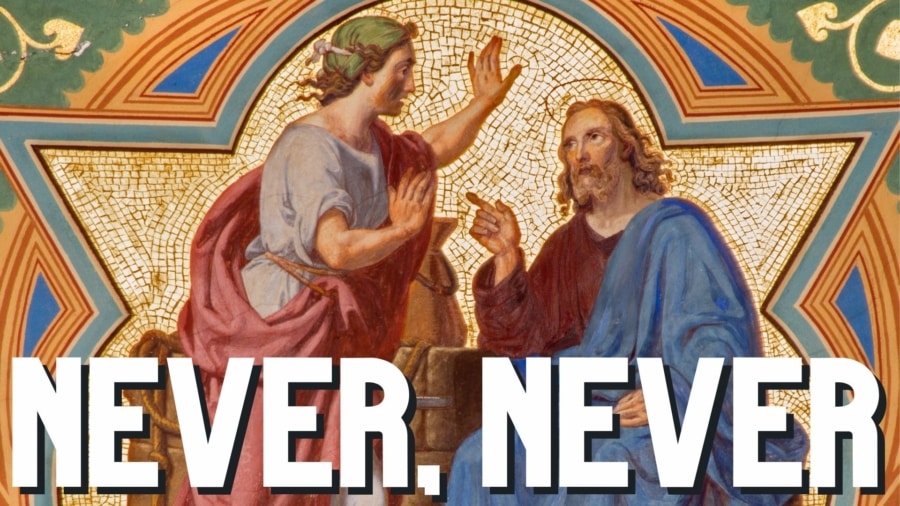 “Whoever drinks of this water will thirst again, but whoever drinks of the water that I shall give him will never thirst. But the water that I shall give him will become in him a fountain of water springing up into everlasting life.” John 4:13–14 There is a spiritual thirst in the soul of every human being. We try desperately to fill it with all the things of this world, but are never satisfied. Only Jesus Christ the Savior can satisfy that thirst. And that free gift of living water can only be received by simple, child-like faith. No thirsty child would reject a cup of cool water. Yet so many in their pride and hardness of heart turn their backs on the Lord Jesus. His Identity First, in John 6:35, Jesus began with the words, “I Am.” To the Jews, familiar with Exodus 3:14, this was a clear declaration of the deity of Jesus (see vv. 48, 51). He uses this formula repeatedly in the Gospel of John. Consider these statements: 1. “I Am He” (John 4:26). 2. “I Am the bread of life” (John 6:35, 48, 51). 3. “I Am the light of the world” (John 8:12). 4. “I Am the door” (John 10:7). 5. “I Am the good shepherd” (John 10:11, 14). 6. “I Am the resurrection and the life” (John 11:25). 7. “I Am the way, the truth, and the life” (John 14:6). 8. “I Am the true vine” (John 15:1). 9. “I Am a king” (John 18:37). His Promise Second, when Jesus says, “shall never hunger … never thirst” (v. 35), and “I will by no means cast out” (v. 37), He is using a formula in the original Greek language—a double negative—that means “Never ever!” It is the strongest possible way to state an absolute negative. Consider these examples of things Jesus says can absolutely never happen to those who believe in Him: 1. Those who believe in Him “will never thirst” (John 4:14; 6:35b). This means to thirst for everlasting life, for they cannot lose it. 2. Those who believe in Him “shall never hunger” (John 6:35a). 3. All who come to Him in faith He will “by no means cast out” (John 6:37). 4. Those who keep His word “shall never see death … shall never taste death” (John 8:51–52). 5. Those who believe in Him are His sheep, and “they shall never perish” (John 10:28). 6. Whoever believes in Him “shall never die” (John 11:26). These seven statements (two under point four) are absolute assurances that simple child-like faith in Jesus Christ, at any point in time, results in eternal life, which can never be lost. The One and Only Condition Third and finally, the condition for claiming the promises of Jesus and entering into everlasting life is always the same, by believing in Him. This is driven home by being stated 98 times in this Gospel and is declared by John himself to be the thrust of the whole book. “And truly Jesus did many other signs in the presence of His disciples, which are not written in this book; but these are written that you may believe that Jesus is the Christ, the Son of God, and that believing you may have life in His name.” John 20:30–31