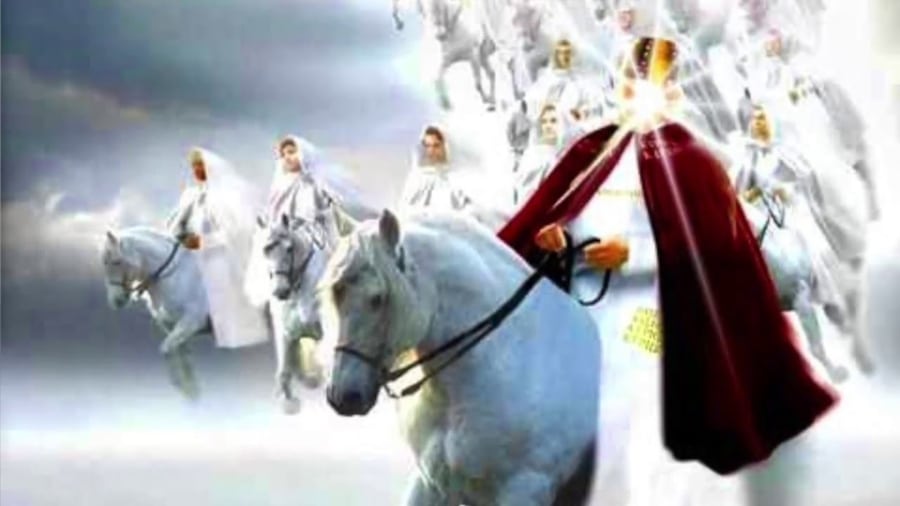 Revelation 19 shows a picture of what Jesus Christ's return will be like. Revelation 19:11 says, Then I saw heaven opened and behold a white horse. And He who sat on him was called Faithful and True and in righteousness He judges and makes war. His eyes were like a flame of fire.” What do you think that signifies? Anger. “Wrath on his head were many crowns…” Absolute authority. “And he had a name written that no one knew except himself. He was close with a robe dipped in blood.” Whose blood? His own. “His name is called the Word of God and the armies in Heaven, clothed in fine linen, white and clean, followed him on white horses. Out of his mouth goes a sharp sword that He should strike the nations. He himself shall rule them with a rod of iron. And he himself treads the wine press of the fierceness and the wrath of Almighty God. And He has on his robe and on his thigh a name written King of Kings and Lord of Lords” This is the glorious coming of our Lord Jesus Christ, and we will come with Him. Why on the thigh? The thigh in Scripture is a symbol of power. If you remember when Samson struck the thousand Philistines, he “smote them hip and thigh.” It's a symbol of power. So here we have our Lord's return, what we call the second advent. Is it right to refer to the Rapture as phase one and the Second Coming as phase two of Jesus coming? Yes. They both refer to His coming. It's just his coming for different groups, which becomes important when we get into the parables.