Home/Each in His Own Order 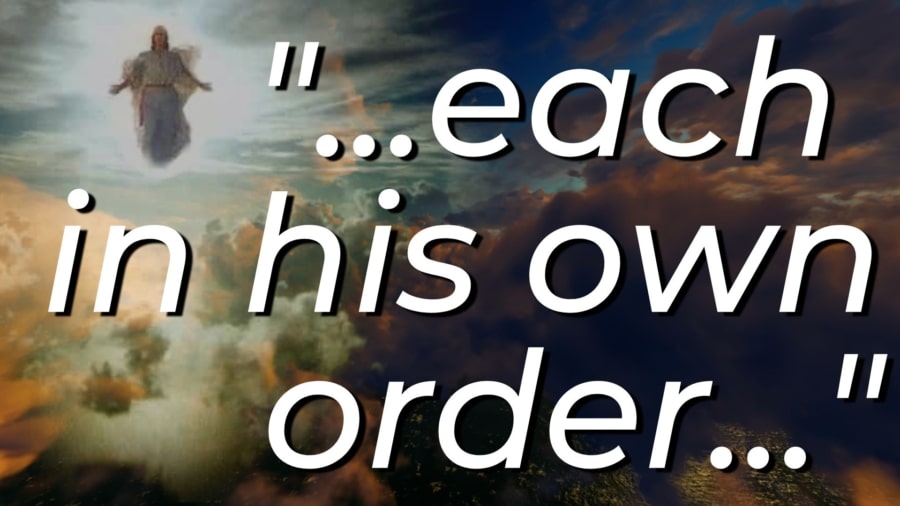 In 1st Corinthians 15:17-19, the apostle Paul picks up on a previous thread saying, "If Christ is not risen, your faith is futile. You are still in your sins. Also, those who have fallen asleep in Christ have perished. If in this life only we have hope in Christ, where of all men the most to be pitied?" 1st Corinthians 15:20 starts with a conjunction of contrast -- "But." In contrast to being the most pitiable, in contrast to having hope only in this life. "But now Christ is risen from the dead and has become the first fruits of those who have fallen asleep." He says in verse 22 four, "As in Adam, all die, even so in Christ shall all be made alive." God only divides the human race into two people during this current age -- you're either in Christ or you're in Adam. 1st Corinthians 15:23 is critical. He's talking about resurrection -- the resurrection of Christ, first and foremost. But then he's also talking about the resurrection of the dead, including people all the way backin the Old Testament. God has a plan for the resurrection of every believer, from every age, from every dispensation, all the way through history. But His plan is orderly, so he says in 1Co 15:23, "But each in his own order." The word "order" in Greek is "tagma" which means to be in rank. Each in his own ranks. It pictures the formation of an army, according to battalions or according to platoons, or however you're going to break it down. Jesus Christ is first. Though there were people that were raised from the dead before His resurrection, that was resuscitation. 1Co 15:23 says, "Christ, the first fruits, afterwards, those who were Christ at His coming." His coming has two phases: 1) the rapture -- for us, 2) the 2nd advent -- for Old Testament and tribulation saints. 1st Corintians 15:23 continues, "then comes the end when He delivers the Kingdom to the Father." At the end of the kingdom age or Millennium, the thousand year reign of Christ on this earth, there has to be a resurrection. Because you have believers who are being born, people who are being born on the earth for a thousand years. The Bible tells us that an infant will die at the age of 100. People are going to enter into the kingdom from the tribulation, and live all the way through the kingdom. They're going to be people in the kingdom still in a flesh and blood body and there has to be a resurrection for them. The final resurrection comes at the end when Christ takes the kingdom and delivers the kingdom to His father. What Paul has given us in a couple of verses is an overview of resurrection. In order each in his ranks, and it fits perfectly with a dispensation approach to Scripture.