This post is dedicated to veteran missionary Jim Parlier who received his promotion into eternity and the presence of the Lord Jesus Christ on Sunday, June 17, which was also Father’s Day. This article will be longer than usual, but I believe it will be worth the read.

The Tale of Two Mountains

In the context of Hebrews 12, we have two mountains: The first is Mount Sinai, which represents the Old Covenant of the Law (verses 18–21). The work of the Law is first to reveal the absolute righteousness of God and, secondly, the condemnation of the human race for violating it. Therefore, it is spoken of in terrifying terms, as experienced by Moses and the Israelites who were present at the giving of the Law (Exodus 20:18–20; Deuteronomy 9:18–19).

The second is Mount Zion, including both the place of Jesus’ crucifixion and the heavenly headquarters of the government of God. This mountain represents the heavenly home of all who believe in the Lord Jesus Christ as Savior and is, therefore, a place of eternal welcome and comfort.

Just as Mount Sinai is a real place and was seen by those who were present with Moses, so I am sure that the scenes described by the author of Hebrews of Mount Zion are real. In fact, it appears that he is describing what believers will see when they die and are transported to their eternal home. These scenes are presented from the perspective of a traveler approaching a long-awaited destination, and involve historically accurate depictions of scenes a weary pilgrim would anticipate seeing.

“But you have come to Mount Zion and to the city of the living God, the heavenly Jerusalem …” Hebrews 12:22a

One of the great promises of the Lord Jesus to His disciples is found in John 14:1–3:

“Let not your heart be troubled; you believe in God, believe also in Me. In My Father’s house are many mansions; if it were not so, I would have told you. I go to prepare a place for you. And if I go and prepare a place for you, I will come again and receive you to Myself, that where I am, there you may be also.”

The heavenly city of the New Jerusalem represents the eternal home of all the spiritual children of Abraham—a place of eternal rejoicing (Galatians 4:26–27). Its dazzling beauty is described in Revelation 21 with twelve gates named for the twelve tribes of Israel, and twelve foundation stones named for the twelve apostles. With walls of every precious stone and streets of gold, its greatest glory is that it is illumined by the glory of God and of the Lamb of God, Jesus Christ (Revelation 21:23).

When Jim closed his eyes on this world, this was possibly the first thing he saw as he passed through the light years of space in an instant, to see his heavenly home drawing near.

The Crowds of Greeting

This is actually a very old custom, to either go out to greet incoming travelers or to go out with them a ways on their journey. Abraham observed this custom when he escorted his heavenly visitors at their departure (Genesis 18:16). This custom was also the basis of the crowd that met Jesus as the promised King at His triumphal entry into Jerusalem (Matthew 21:1–11).

We also see the same practice as Paul was being taken in chains to Rome—believers came out from the city to greet him (Acts 28:11–15).

Imagine, as Jim approaches the city, out from its gates spills a throng of countless angels, singing and celebrating his homecoming! And why not, since Jesus said, “Likewise, I say to you, there is joy in the presence of the angels of God over one sinner who repents” (Luke 15:10). If the angels throw a party in Heaven at the moment of our new birth, why should we be surprised at their eagerness to welcome us home?

The Saints of All Ages

Following the welcome by the angels, Jim would have had a long line of greetings as he passed through the saints of the Old Testament. There is Noah, Abraham, Joshua along with Sarah, Rebekah, and Rachel—all greeting him, “Welcome home, Jim!”

Then would come the long line of Church-Age believers: the Apostles, Peter and Paul, John and James. There are Mary and Martha, and Aquila and Priscilla. And as he passes down the line, shaking hands and being embraced, he suddenly hears loud cries coming closer and closer, “Ese, Jim! Ese!” and there are a multitude of precious Managalasi believers, shouting and grinning, and hugging him with those strong, brown arms. The multitude who greet him are there because of the life of love and labor that he and Jaki have dedicated to their salvation.

Many will be saying, “Jimmie, where is Jaki?” and he will respond, “She is coming, just a little behind me. We will soon welcome her home, too!” And they will surround him and begin to escort him into the city with songs and dancing.

The Father and the Son

“… to God the Judge of all, to the spirits of just men made perfect, to Jesus the Mediator of the new covenant, and to the blood of sprinkling that speaks better than that of Abel.” verses 23b–24

Imagine as Jim and the joyful multitude come near the city gates, there stands the heavenly Father who guided and guarded his life, with Jesus, the Son, who gave Himself on the cross for just this moment. What will that greeting be like? Imagine hearing a hearty “Welcome home, Jim!” from the Father. Imagine Jesus saying, “Jim, this was the joy set before Me, for which I endured the cross, as I looked forward to this day” (Hebrews 12:2).

And then, all the company of souls “made perfect” by the “blood of sprinkling [cleansing]” will accompany the Father and the Son as they escort Jim to the place the Lord Jesus prepared for him. What will it be like, after a life of longing and suffering, to finally be home?

Imagine life in that eternal paradise surrounded by that vast and loving company where “God will wipe away every tear from their eyes; there shall be no more death, nor sorrow, nor crying. There shall be no more pain, for the former things have passed away” (Revelation 21:4).

Imagine Jim’s rich inheritance as he receives the reward for his life of service to the Managalasi people, to hear the Father say, “He who overcomes shall inherit all things, and I will be his God, and he shall be My son” (Revelation 21:7).

“O Death, where is your sting? O Hades, where is your victory? … But thanks be to God, who gives us the victory through Our Lord Jesus Christ.” 1 Corinthians 15:55, 57 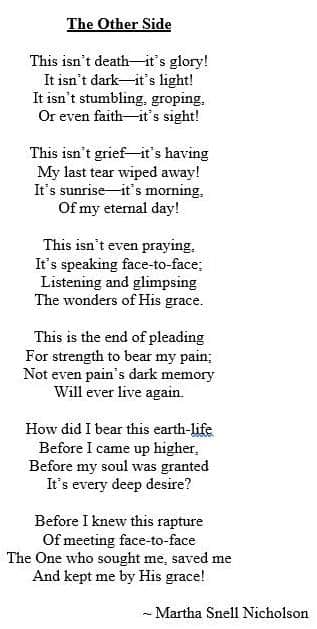 Rest well, Jimmie-o. We will all be along soon!