"And from there they sailed to Antioch, from which they had been commended to the grace of God for the work that they had accomplished…and gathered the church together, they began to report all things that God had done with them and how He had opened a door of faith to the Gentiles." – Act 14:26-27 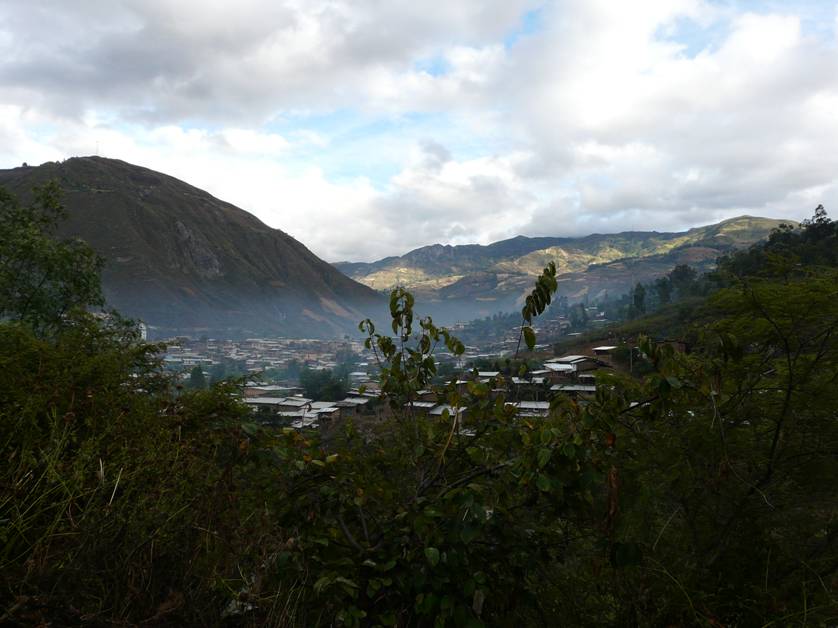 We want to thank all of you who lifted us up in prayer during our recent mission to Peru. We held two separate pastors conferences and both went extremely well. The first was held in the mountain town of Huancabamba, known worldwide as a center of witchcraft and black magic. While there we were told that political leaders from around the world often come here for rituals to enhance their power and influence, including many from America. We heard that the witchcraft "gurus" had assembled prior to our coming to work rituals to hinder the conference from happening. As I told the believers attending the conference, every day we met and studied the word of God and celebrated the death, burial, and resurrection of our Lord Jesus Christ was evidence of the power of God over all His enemies. We had about 75 men and women attending, some of them had walked from four to nine hours over rugged mountain trails to be present. I taught the book of Colossians, while Nan also had afternoon classes with the women on Sunday SchoolTeachers Training. Please pray for the translation and printing of the one year village curriculum into Spanish for use amongst the Sunday School classes in this area. We provided three meals a day to all who attended and mealtimes were full of laughter, questions, and good fellowship for us all. 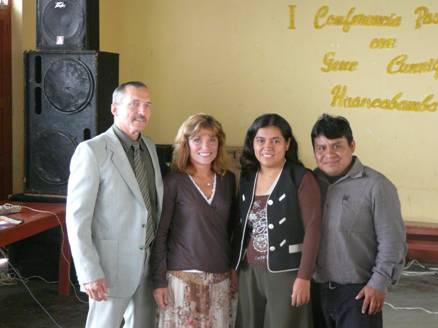 The second conference was in Chulucanas, down in the desert. This is the home of Julio and Betty Ceasar, our contacts and representatives in South America. You can see them in the attached pictures. Julio is the one who found a copy of "The Basics" in the home of a pastor he was visiting, and begged until the pastor gave it to him. This was over ten years ago, and he carried this copy through his seminary training in Brazil, and has used it to prepare hundreds of messages he has given in Brazil and Peru. We are so thankful for Julio and Betty, and their dedication to the ministry of sound Bible teaching throughout South America. They will be working with us on printing Spanish books for distribution through the countries of South America. We also hope to establish a training school, along the lines of those in Papua New Guinea and India, for the training of pastors and workers in Peru and beyond. We ask that you please keep this objective in your prayers. If the Lord is pleased to supply, we will open the school within the next year, with Julio as the director and head teacher. Remember to pray for him and Betty and their family!

The Chulucanas conference was attended by over 150 pastors, evangelists, and workers, along with many believers hungry to hear the word of God. Here I taught the Upper Room Discourse from John 13-17. Many of the pastors had attended our first conference two years ago, and were eager to learn more. At one point quite a lively debate raged over the issue of eternal security. They said, "If we teach this to our people, they will feel free to go out and sin." I began to ask them some rhetorical questions. I said, "Has telling them they will lose their salvation stopped them from sinning?" They smiled. "Do you think teaching them a false doctrine will encourage godly living?" They looked a bit sick. "Has what you teach kept you men and women from sinning?" They looked sheepishly at each other. Then, "Are you willing to deny the all-sufficiency of Christ’s work on the cross, and stand before Him to answer for this teaching?" By this time they were fearfully looking around for escape. I believe the Spirit of God used that exchange to convict them of the truth. It always amazes me how we try to use fear, the power of the devil (Heb.2:14-15) in hopes of promoting godliness!! In reality, "Whatever is not of faith is sin" (Rom.14:23). Yet the truth of the finished work of Christ for our salvation, and our reception of it "by grace through faith" alone remains the greatest battleground, not only in remote corners of the world, but right here at home in America. How pathetic is our understanding of the victory of the cross of Christ! 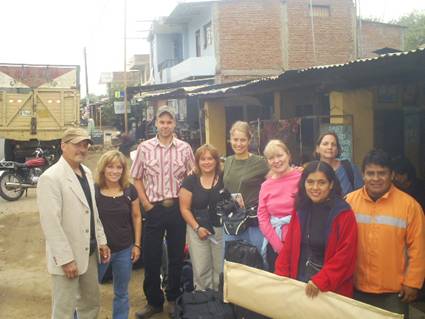 Our team for this mission included my sister Cindy Cunningham Garcia and Joan Wainer as translators, pastor Doug and Kristy Wray from Kalispell, Montana, and evangelist Jack and Alisabeth Jeffries, from Atkins, Arkansas. Each of these workers added so much to the overall success of this mission journey. Doug brought morning devotions for the team, and Kristy joined Nan in several of the teaching times with the women. Jack was presenting the Gospel at every opportunity along the way, and Alisabeth helped him with a large children’s class at one church. She also worked with the children who came with parents to the conferences. Next year we hope to expand to a conference in the Amazon Jungle basin, and possibly one along the coast. Now is the time to begin praying for next years conferences, and for the follow-up of the Spirit of God to those who attended this year.

After only ten days at home, we are now off again. As I write this report, Nan and I are enjoying some time in Sydney with Wil and Kristy, and little Arelina, before we go on to Perth. In Perth I will speak at a conference in Rockingham, hosted by Peter and Zoe Beringer. Peter is one of our students who now pastors the church in Rockingham. We will have an opportunity to catch up with Katie and Daniel, who have just returned from his training at Chafer Seminary. I will also be teaching at the Cross Road Bible Church and the Mundaring church as well. Jared and Tiersa are enjoying a visit home to the States with little Aram. Pray we can be an encouragement to our loyal Aussie team, who pray and support the work we do around the world.

From Perth, Nan and I will go on to Zambia, for the long trek into the western province, for a conference with pastors, workers, and their wives from remote areas of Botswana, Namibia, and Angola. This is a demanding journey into a very remote area, and we ask for your daily prayers. First and always for boldness and clarity in proclaiming the gospel of the grace of God, then for protection from illness or injury in such an isolated place. We do count on your prayer support constantly, and ask that you take just a few moments daily and remember us, and pray for all we reach to have open hearts and minds for the truth we bring to them. As all of our conferences include feeding all attendees, we especially thank all who give so generously in making this a blessing above and beyond what many who attend would ever expect. Most come expecting to go hungry for days, just to hear the word of God. I wish you could see the looks of amazement and delight on their faces when they hear they will also be fed physically – not skimpily, but extravagantly according to their standards. As Paul said to the Philippians (both chapter one and four), we also say to you all, we cannot but thank God for all your participation in the work of the ministry. Our thanks is such a small thing, but one day the Lord will reward you openly for what you have done in secret. We look forward to that day!

In His matchless grace,