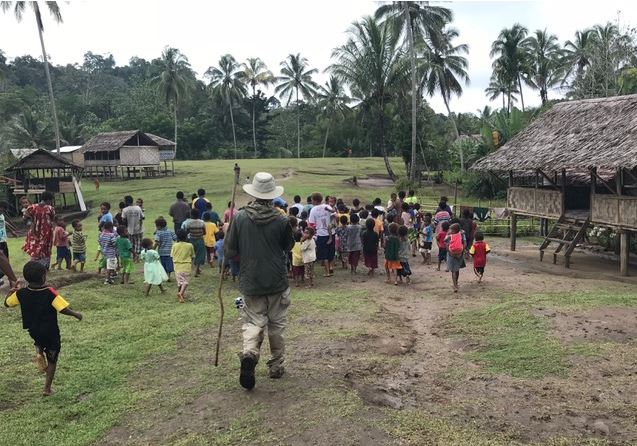 After the first week of classes in Numba village were complete, Nan, Rich, and I set off with a team of approximately 16 of our former students and graduates for a week of trekking from village to village, to greet and encourage the people and hold teaching and prayer meetings. Thomson, one of our graduates, was the organizer and team-leader for our journey. He and his assistant, Nick, did a great job of guiding us along the way. Thomson was joined by his 15-year-old daughter Nan, named for my Nan, and born shortly after our first visit. 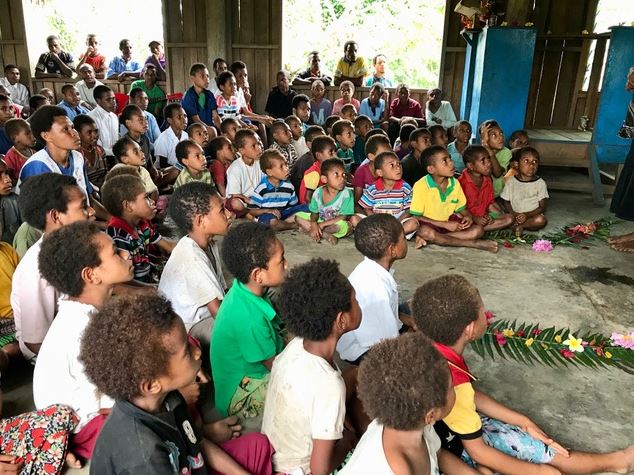 We started out early on Sunday morning, walking for about two and a half hours to Kawowoki village, where we met with the church there for the morning service. As always, the village treated us to a native lunch of various kinds of yams, bananas, pineapple, and coconut, before we moved back onto the jungle trail to Afore village. This is the end of the “road,” where we would catch a ride down toward the sea and our other villages.

We stayed in the house of the local policeman, who graciously hosted us, and left at 5 a.m. the next day for a four-hour ride, with some 25 or so people packed into the back of a small Toyota four-wheel-drive truck. Down the track, we dismounted along the road for a short walk to Gamino village—a very poor village, with a small thatched church. We were received there by Pastor John Goy and the village Christians, with wonderful hospitality.

We had time to go down to the stream for a wash-up, then back to the village for the evening service, an overnight in the thatched mission hut, an early devotional service, and off again down the track to Boro village.

According to Martin, the church leader in Boro, we were the first “outsiders” to visit his village; we were royally treated by the village Chief, Cecil, and his wife Rebekah. It was here that Rich was accorded the honor, as the “elder” of our team, to receive a beautifully worked necklace of about six large boars’ tusks, all fitted together in an amazing design. From then on, all of the team referred to him as “Chief Ritchie.” The village elementary teacher, John Henry, hosted us in his “wind house,” a large platform under a thatched-roof, which served both as a greeting place and our place of rest for the night.

Our evening service was attended by about 200 people, many from surrounding villages who heard we were coming. Here, I taught on the five daily disciplines: Wash (1Jo 1:9), Eat (Mat 4:4), Walk (1Jo 1:7), Work (Eph 2:10), and Rest (Mat 11:28–30). Each truth was backed up by a pantomime of the act, specifically for the benefit of one of our team, Evik, who can neither speak nor hear. He enjoyed the class immensely, and clearly understood everything. Evik is the son of Ivan, pastor of the church in Numba. He is a powerful man, and always “signs” that his job is to watch out for and protect everyone on the team. This task he takes very seriously, as there has been much tribal fighting recently, with huts burned down, and at least two murders in the area.

From Boro, we walked down a trail running along a ridge leading down to the sea, with beautiful views of the jungle mixed with Kunai grass, with the open sea ahead of us, leading to the village of Waiwa. We were greeted by dancers in their traditional dress of bark skirts and feather head-dresses, along with drums and tribal singing. Here, we had both an afternoon and an evening session. Our stay was in a comfortable bamboo guest-house owned by Wesley, one of the church leaders. This house sits on a grassy knoll with sea waves lapping at the shore just in front of the house. We observed fishermen who were out at sea in their hand-crafted outrigger canoes spear-fishing in the beautiful blue waters.

The next day after our morning service, a motorized dinghy arrived to take us across the bay to Keta village. This village sits on a spit of white coral beach with waving coconut palms and thatched huts. 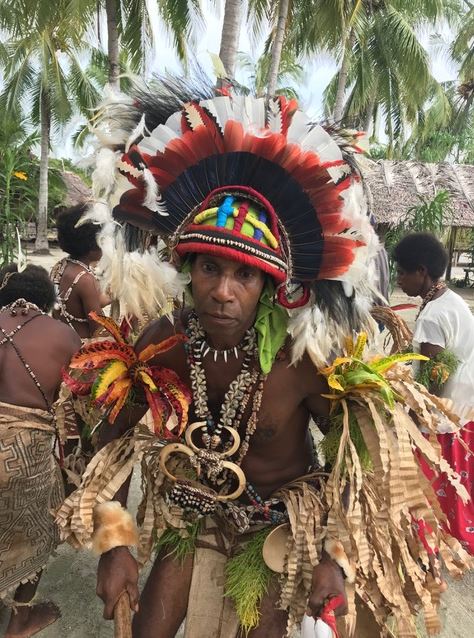 Once again, traditional dancers greeted us with loud drum-beats and blasts from a trumpet-like conch shell. A two-story, thatched mission hut was our comfortable place for the night. The evening service included classes for the children led by Nan (as she did in each village); as always, the adults loved her classes and crafts as much, if not more, than the children. Later, Nan and I borrowed one of the outriggers for a lazy paddle in the clear blue waters of the Coral Reef.

All along the way, people presented with medical problems—especially tropical sores and ulcers. Nan had come prepared to do wound-care, and enjoyed being able to help in some small way to make their lives a little easier. We also encountered several people with malaria and were told that the hospitals and clinics in the area were out of medicines and supplies. Fortunately, we had purchased some malaria medicine in the capital city before flying out and were able to help with that provision. 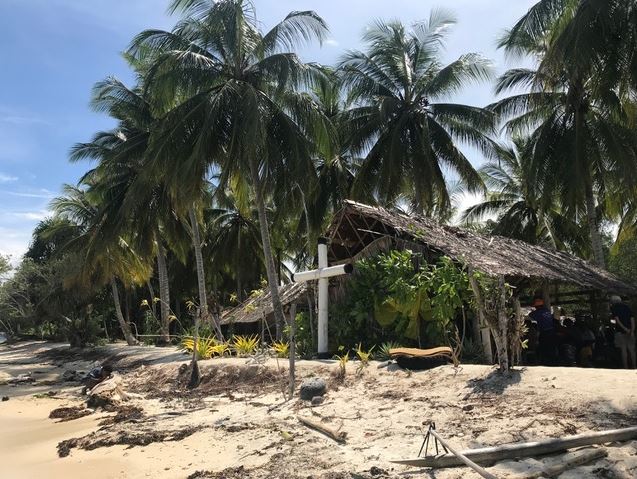 Our last village was again reached by dinghy, which took us to a village above Oro Bay for our final evening and morning services, with another wonderful group of believers.

Our last 24 hours was the kind of thing that is part and parcel of travel in remote places. We awoke to music (the guitar and singing of team members) at 5 a.m. We had a morning service, followed by a light breakfast of fruit, then off down the track to meet the truck at the road. It was supposed to be there around 9 or 10, but we waited all day with no truck in sight. These incidents always provide for opportunities, so we walked to a nearby open-air market, where local villagers come to sell produce and buy soap, salt, kerosene, and other necessities.

Thomson called out to get the attention of the crowd, and the team sang a couple of songs. I was asked to speak to the crowd, who at first listlessly tolerated our intrusion. However, though I only spoke for a short time, about one hundred people had slowly gathered around to listen and were enthusiastic in their applause in the end. I stressed to them that I did not represent a church or denomination, but came to represent Jesus Christ, who loved and had died for each of them. I said that while churches fight over which is the “true” church, Jesus Christ—“the way, the truth, and the life” (Joh 14:6)—came to die for all mankind and give the gift of eternal life, which each of them could receive by faith alone. Using the story of Peter walking on the water (Matthew 14), I asked the question: “Are you standing by faith, or sinking through unbelief?”

We waited for the truck to come, which finally arrived at 6:30 p,m,—only 9 ½ hours late! Again, we all crammed into the truck, and took off for what proved to be a seven-hour ride, in the building rain, getting bogged down in the dark—multiple times—all the men pushing the truck to get us out and on the road again. This scenario repeated itself over and over as the road conditions are always terrible.

It may seem that situations like this would be unbearable, but I am always amazed at how much contagious laughter there is, how much laughing and singing, and good-natured joking keeps the journey interesting. At one point, about four hours into the journey, we stopped at a clear, rushing stream, with giant jungle trees closing out the sky, so everyone could collect drinking water, or take a quick “pit-stop”—men up the track one way, women the other, to use the “bush-facilities.”

We arrived back at Afore village at 1 a.m., with the rain still falling. From Afore, we had to get out of the truck and grab our packs for the three- to four-hour walk back up the mountain to Numba village. By this time, our team had eaten very little for 20 hours, but there were no complaints. The only way to get home and dry was to walk the muddy trails, crossing two streams along the way, arriving at Numba about 4:30 on Sunday morning—almost exactly a week after leaving. Logan had stayed behind (much to his disappointment, as he loves the trekking) to teach the students, and he began immediately to prepare hot water and some light food for the team members who followed us all the way home. Then, for the first time in a week, we enjoyed a warm shower, clean clothes, and a couple of hours’ rest before the Sunday morning service.

It is certainly impossible to detail all the events, some funny, others heart-wrenching, that occur over a week like this. However, I trust this will give a brief summary of our time and God’s matchless grace and provision along the jungle track.

Through your faithful prayers and support, you joined us on this amazing week of adventure and service!

We departed Numba village the day after our hike ended, spending much time at the air strip giving our good-bye handshakes and hugs to the people we have come to love so much. Good byes are never easy!

We will follow this up with prayer requests from the trip.