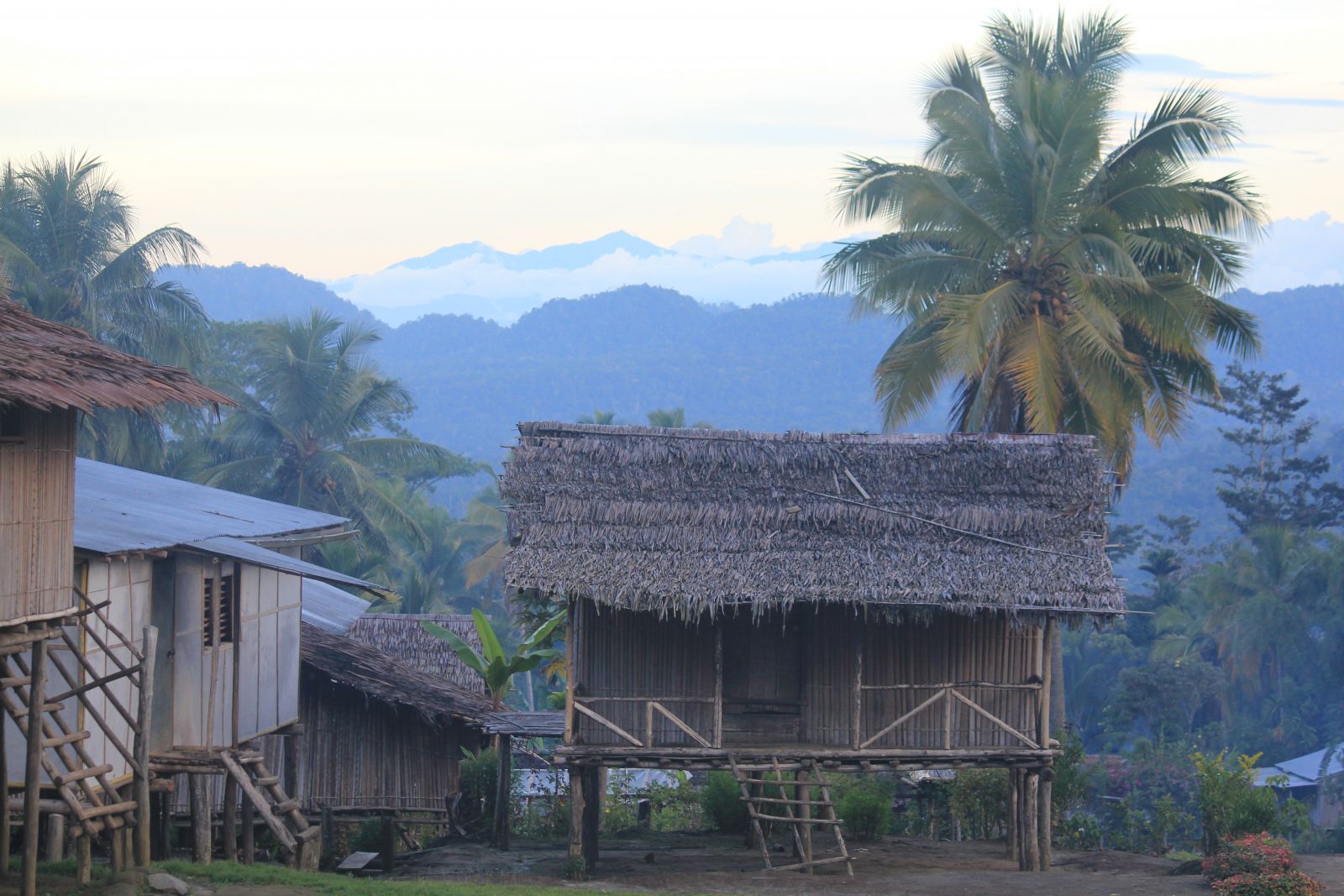 We had a wonderful two weeks with the believers of Numba Village and surrounding villages. It is always great to return and see what God is doing in the lives of these wonderful people. While I taught the Ese Bible Institute students the course in Teaching Principles and Methods, Nan and her team went out to the villages for children’s programs and health clinics. It is exciting to see the believers who have graduated from the Institute now reaching out to more and more remote villages. Many who have attended the school are now forming mission teams, under the guidance of Pastor Michael, the school principal, and his second in command, Chiruru. These men are also leading some of these teams into areas that are malaria infested along the coast, so we ask that you pray for them. The form of malaria in this area is very deadly. 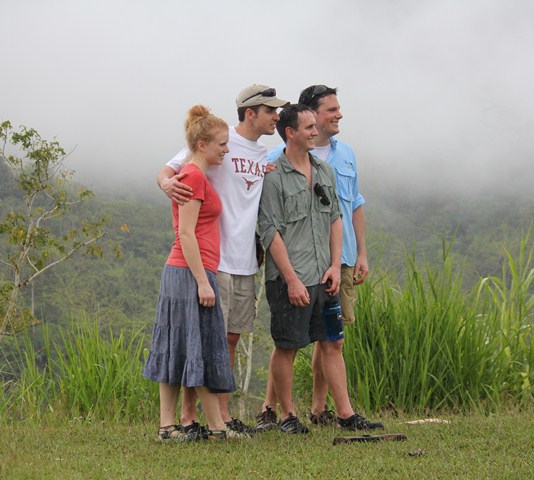 We were blessed to have four great helpers, all from Pennsylvania. Dr. Chris Sepic (orthodontist) brought thousands of free samples of tooth brushes and tooth paste. He taught classes on dental health and hygiene, as well as acting as a visiting doctor, caring for hundreds of cases of sickness, infections, etc. Also helping in all the children’s programs and health clinics were Jonathan Gallo, a teacher, Blair Buselli, an electrician, and Elizabeth Preston, one of Nan’s trusted helpers in India and a very accomplished violinist. 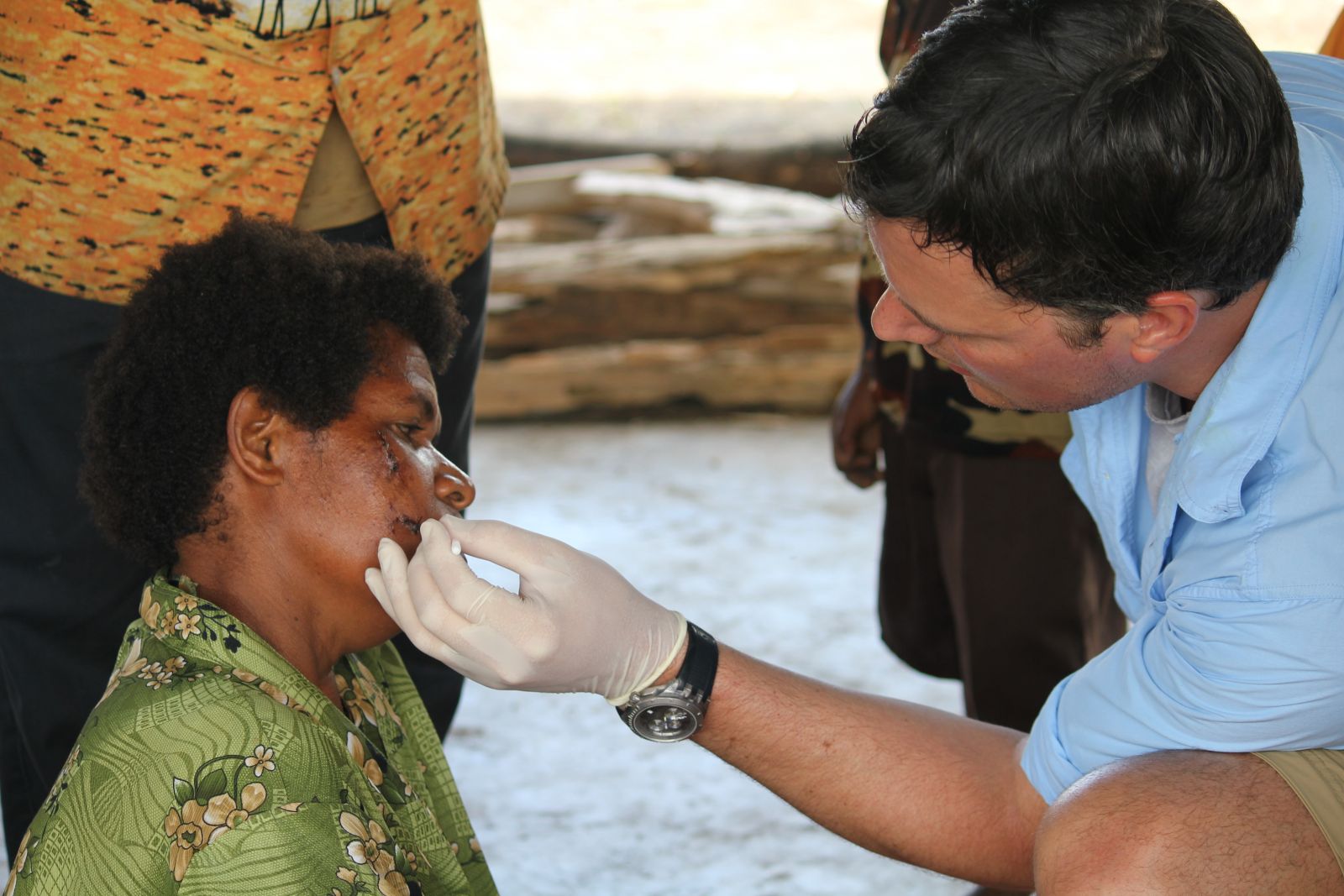 It is always rewarding to watch how our Lord brings teams together, with varying skills, abilities, and gifts, and molds them together into a team. In addition to his dental and medical skills, Chris brought along a good supply of fishing line and hooks. Small as this may seem, these are commodities that are very difficult to get in the jungle villages, and it was fun watching so many people making up a roll of line with a few hooks, and seeing the big smiles on their faces.
At one point the water system in the house broke down due to a worn out pressure valve. Blair went to work and rigged an alternate system, so that we continued to have solar-powered showers. In addition, he was often out on the front porch, challenging Eavik, the local strongman, to contests of push-ups and pull-ups. 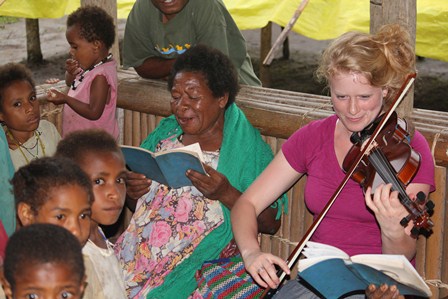 Jonathan joined in all the activities, was a big hit with his great sense of humor, and was always involved in some activity with the kids of the village. His obvious joy of life affected everyone, and when he was around, everyone was having a good time.
Nan and I always feel so privileged that God permitted us to be involved in the great ministry of Jim and Jaki Parlier, who invested their lives in the Managalasi people. They have certainly deposited much with the Master through their dedicated service, and it is an honor to be involved in their work.
Australia
After coming out of the jungle, we were able to visit Wil, Kristy, and their two children, Ari and Ashiel in Sydney. It was good to get to know our grandchildren a bit more. Our separation from children and grandchildren is difficult, but part of the price of our calling. It is always richly rewarding to spend time with each one of them.
We also went to Canberra for our first weekend Bible conference there. Around 30 people joined us—some from Perth and Brisbane—for a study of the book of Titus, on the theme of “Living in Light of the Cross.” It was great to see friends and fellow-believers of past acquaintance. One family had come to hear me teach when I first visited Australia in 1992! We had some good study and wonderful fellowship together.
The conference was planned and organized by our dear friend, Tanya Horton who—along with her helpers—did a real bang-up job, finding a great venue, providing food and refreshments, and making everyone feel welcome. We look forward to our next opportunity to return. We will be sure next time to include a visit to the great Military Museum there, which I have visited but Nan has not. If you ever visit Australia, I highly recommend it to you.
Thanksgiving
We cannot help but give thanks for all of you who uphold us in your prayers and by your offerings. We are very aware that every journey we undertake involves each one of you, and that we represent—not only our Lord first and foremost—but also those who are unknown and unsung, but who by their support are making investments in eternity. One day you will see that the Lord’s interest rates are far beyond your expectations. Thank you all and may God continue to guide, strengthen, and refine you for His greater purpose!
Your fellow-servants,
Gene and Nan
Basic Training Bible Ministries2011-04-15T00:00:00+00:00
Go to Top