Last of the Headhunters

Last of the Headhunters

Many of you know that we have made many mission trips into Nagaland. I thought you might enjoy the following article published in the April 4, 2017 issue of the U.K. Sun—Gene

LAST OF THE HEADHUNTERS

THE tradition of headhunting was meant to have ended decades ago—but a photographer has tracked down a tribe who are still rewarded for bringing back the heads of their enemies in battle. 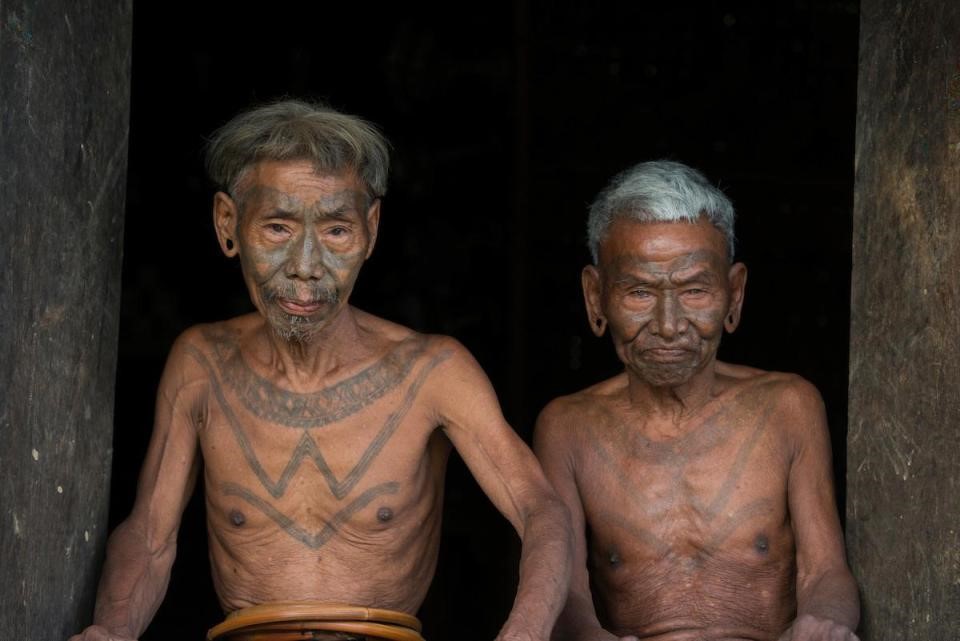 Incredible images show men of the Naga Headhunters proudly displaying their elaborate face and chest tattoos—badges of honour which recognise their prowess as a headhunter.
The Naga headhunters proudly show off their tattoos, given as a reward for bringing back enemies’ heads from battle
Rows of human skulls on display shelves are evidence of bloody combat with other tribes in years gone by.
The Naga live a traditional way of life on the border of India and Burma. 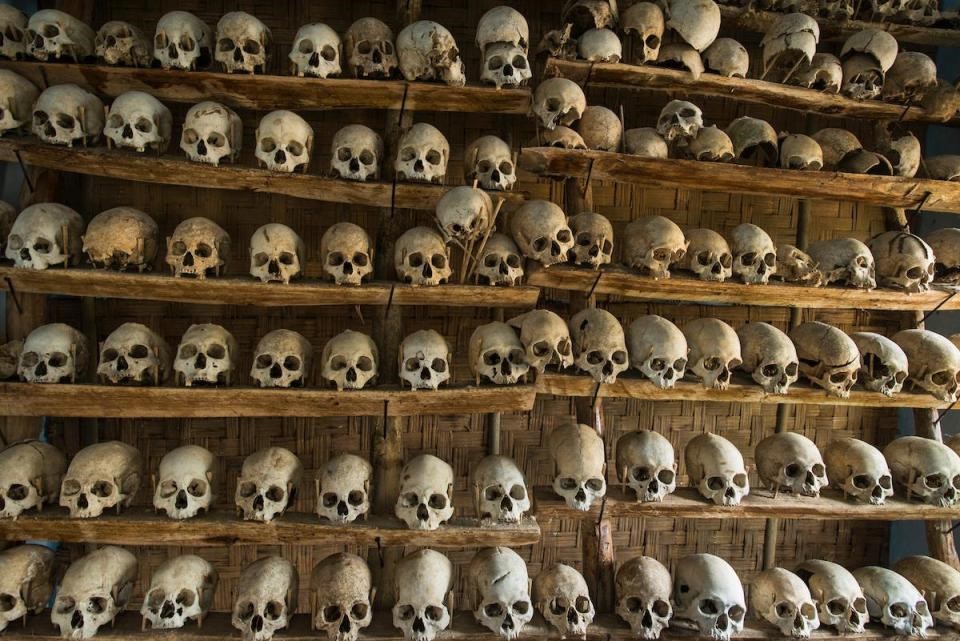 Elaborate face and chest tattoos are worn as a badge of honour by the fearsome warriors. Other striking shots show a room full of human skulls which are displayed like trophies and a house decorated with buffalo horns to indicate wealth.
The stunning pictures were taken in Nagaland in India by British photographer Pete Oxford, who sat with the tribal elders who smoked opium while posing for the camera. 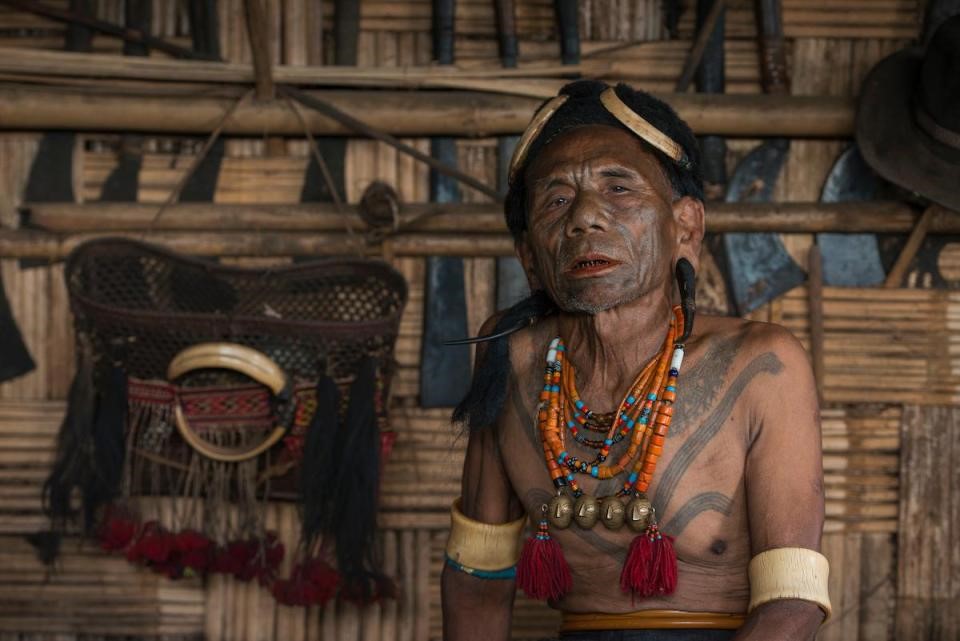 He said: “We were looking for bona fide headhunters.
“Warriors who had brought home one or more heads severed from enemy clans during battle.
“These warrior were not cannibals, however: the heads were ceremoniously carried home, in special baskets, where the skulls were then displayed as trophies.
“In recognition of his prowess as a headhunter the warrior was entitled to his badge of honour—a set of elaborate tattoos decorating his face and chest.”

Despite the fearsome reputation of the warriors, the conservation photographer was surprised at the tribe’s friendly attitude to him as an outsider.
Pete, 58, from Torquay, said: “One of the Ang’s (Chief’s) houses that we visited, half the house was in Burma and the other in India. We were invited in and sat with the Ang and his two friends.
“All three men were heavily decorated with facial tattoos and I looked deeply at them for a hint of their murderous forays of days gone by.
“I could only find bright glimmers of mischievousness and playful childlike grins.
“My head grew heavy as I sucked in the dense smoke billowing from the brass crucible bubbling in the fire.
“Opium was being rendered down in readiness to top up the three men in their state of relative oblivion.” 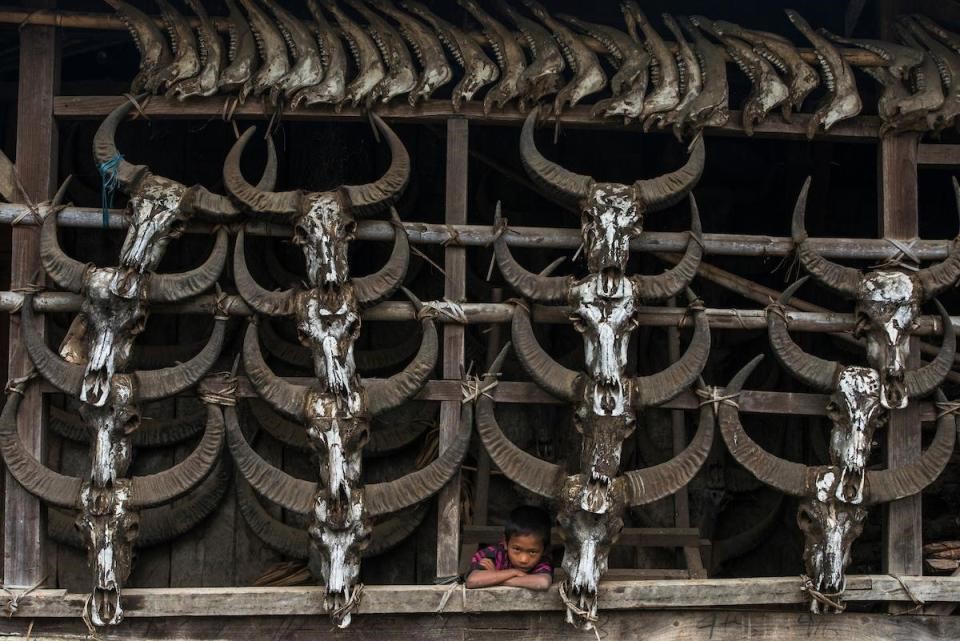 This chief’s house is decorated with buffalo skulls as a sign of wealth.
British photographer Pete Oxford said he was surprise[d] the warrior tribe were so ‘friendly and welcoming.’
Tribesmen put on their ceremonial dress to help him understand their culture and way of life.
“We walked visa-less through the Burmese side of the village and found more men, proudly wearing their tattoos.

“All were friendly and not one of them was even slightly aggressive nor gave me the feeling that he might want to cut off my head.
“After all headhunting last happened somewhere back in the 1970s—at least that is the official story.”
Pete noted how the Naga tribes were still very traditional in their ways and ignored the Indian festival of Diwali.
He added: “Traditional shawls were decorated with tigers and knives were carried on the back in open bamboo sheaths.

“Buffalo were used to haul logs from the forest and hot water was boiled for tea in green bamboo stood next to an open fire.”
Pete said the tribal elders puffed on opium pipes as they posed for his camera.
The tribesmen wear Traditional shawls decorated with tigers and carry knives on their backs in open bamboo sheaths.

Pete said: “Not one of them was even slightly aggressive nor gave me the feeling that he might want to cut off my head.’
“It was Diwali, one of Indias’s largest festivals, but it passed unnoticed here in Nagaland.
“People were very friendly and welcoming and the older women would even let me get in close to their legs with my camera to document their fading leg tattoos.
“A young man approached us and asked if we would like him to put on his traditional dress for a photo. He did so, for no money, and no other apparent reason than to help us get the most out of our visit.”
All photos courtesy of Media Drum World.
Basic Training Bible Ministries2017-03-30T00:00:00+00:00
Go to Top