I am sitting in a little hotel room in India with the incessant noise of the city all around. We leave in a few hours for the airport at the end of three weeks of amazing time ministering to the children of India. My heart was full of joy this evening as we just finished up our last village, and I reflected on the privilege of sharing the message of God’s redeeming love with almost 4,000 kids these last few weeks. And then, life got even better! I checked emails to find the grand news that God just blessed our son Wil and his wife Kris with a healthy little baby BOY! I can’t wait to cuddle this new little member of the clan and see with my own eyes the fulfillment of Psalm 128:6! 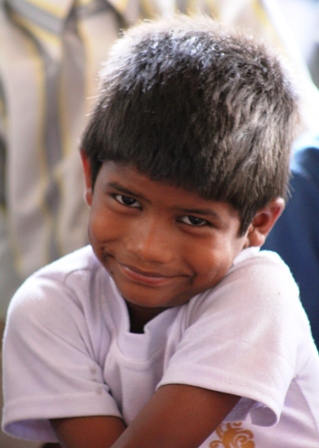 It’s hard to know where to start. I just have the picture of hundreds of little brown faces running through my mind from well- dressed, well-groomed, well-mannered little kids on the front rows of CBS to the tattered and ragged little slum kids that wander in from the streets. My heart longs to reach the curious ones that gather at the gates of the church or listen through the windows, yet are not willing or not allowed to come inside the walls of the church to hear the complete message. Each one is so precious, and I long to know that their eternal souls are safe in the kingdom of God. The sights, smells, and sounds of India confront all of your senses at once, but the greatest confrontation is to your heart! 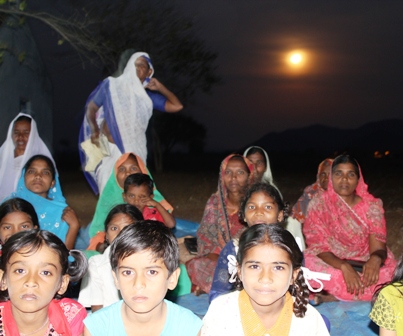 We began the ministry here by going to some of the more remote villages that we haven’t previously had the time to do. I was joined by Annemaree Holman from Australia (Cross Road Bible Church) and her daughter, Sarah. Pastor JF drove us a distance of about 8 hours from central India, and we used a central town as our home base to reach out to 6 villages and a total of about 1,200 kids. Some meetings were held in decent-size churches and a few were held under the dim light of a full moon, with the kids sitting on tarps on the ground. One village in particular sticks out in my mind as so many adults gathered around in the dark shadows to listen to the message of salvation given to the kids. Pray with me that God will not allow their souls to rest until they put their faith in Jesus Christ, the One and only Savior of the world! 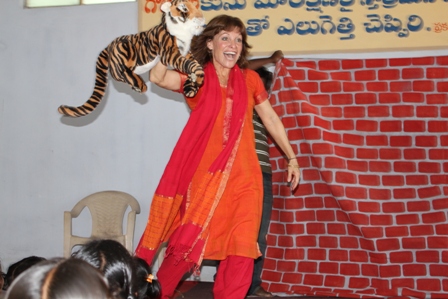 In these villages, we started out with a fun puppet show called the Wall Story that leads the children to the realization that their sin is a problem that separates them from a holy God. It is a great way to introduce the Gospel message and teach them about Jesus Christ, the Light of the World. After the Gospel message, we pass out a laminated memory verse to each of the kids and help them learn it. Thanks to so many of you who helped in the preparation of 16,000 of these verses! They are now in hands and homes throughout India. Following the memory verses, we give the kids a little Gospel coloring book translated into their language, and spend some time coloring together. This time is followed by some songs and finally a Bible story and craft. The theme of our Bible stories this year was “Even a child is known by what he does.” We focused on the life of Samuel in these villages, leaving the children with encouragement to be servants in their homes and churches. 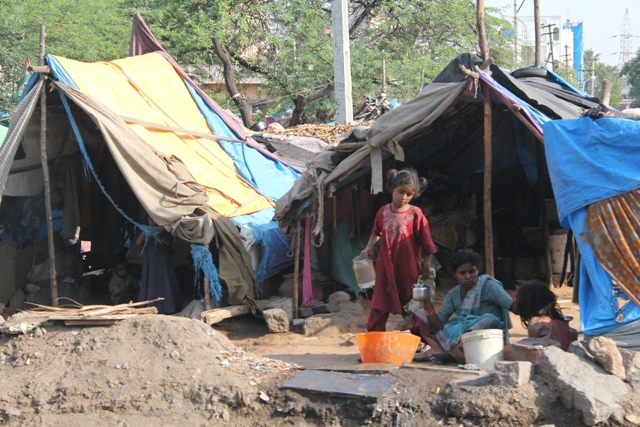 In our travels from village to village, it was a privilege for me to see the place where Gene first taught in India, nearly 20 years ago, long before I was able to join him in the ministry abroad. He taught a message under the shade of a large tree to a small group of Christians – in that place there now stands a beautiful little church as a testimony to the grace of God!

Life in these villages is so similar to Bible times. The women still gather at the well, the men plow the fields with oxen, the families live in a simple one or two room house and cook over a fire. The only difference is cell phones! It was funny to me to see men dressed as they have for hundreds of years, riding on a wooden oxen cart while talking on a cell phone! It’s all just part of the sometimes comical diversity of India!

We appreciated so much your prayers for our safe travel during this week. The highways in India are treacherous and definitely test your ability to rest in God’s protection. It helped a lot to know we were in your prayers and in His Hands! 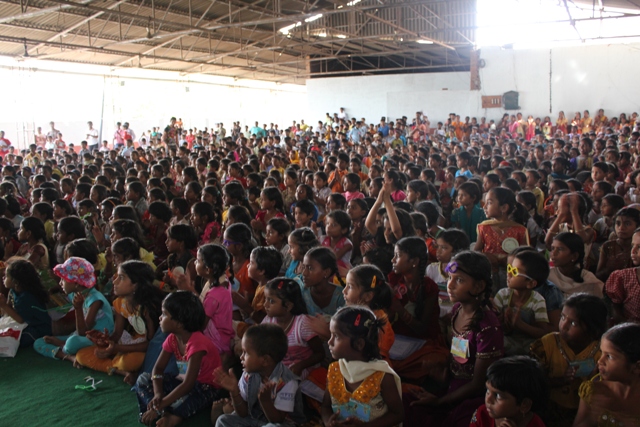 For week two, Annemaree, Sarah, and I were joined by the rest of the team from the USA: Kim Maguire, Janet and Elizabeth Preston, Desi Carnell and Mikal, and Jackie Gonsolis. I love living and working with these glorious ladies who will endure anything thrown at them for the sake of the children of India – they do it all without complaint, with a big heart and smile, and then thank you for letting them do it!

During this week we held our tenth Children’s Bible School with a four-day program for about 1,300 children. The highlight of this CBS was the fulfillment of a desire from many years ago. There is a large slum area near the place where we teach – a place where families put up makeshift tents made out of random sheets of plastic and call it home. They make a living by rummaging through the nearby dump for plastic and metal scraps that can be sold for a few rupees. Gene and I have often prayed that we could somehow have some ministry to these kids and their families. This year we had to move the CBS from the school where we usually hold it, to a rented convention center that could accommodate so many children. Praise God – the convention center was right across the street from the slum, and many kids came in from there to join the CBS! They were ragged and dirty, their clothes were torn but they were so happy! At first they were a bit shy of the camera but when they discovered that it captured their faces and they could actually see themselves in there, they were all poses and smiles! 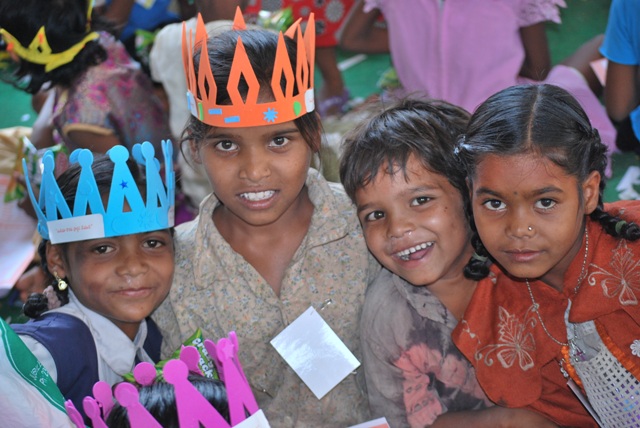 We gave the Gospel to the junior children through the “I Am” statements of Christ and continued on in the Bible time with more stories of children in the Bible, following up the story of Samuel with Miriam, Josiah, and Naaman’s servant girl. My class was the senior class of 7th to 10th graders. We studied the armor of God, the tactics of Satan, faith, and prayer from Ephesians 6. In this four-day program, the kids also receive a memory verse, coloring book, and craft each day. It was quite refreshing to me to hear my senior class of 600 actually clap when they got a chance to color their little books on the armor of God!

After this CBS ended, we did another one-day program at two different villages, and then on Saturday, had the opportunity to meet with about 50 village pastors and their wives to encourage them in their ministry with some pertinent principles from Scripture. 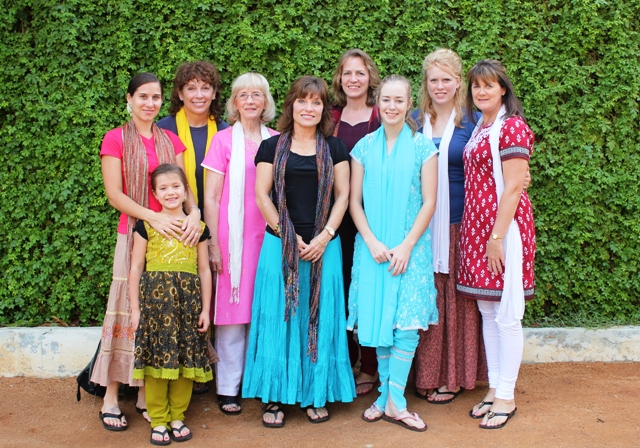 The third week we did another four-day CBS program for a smaller branch church on the outskirts of the city. This was a hot week, with temperatures in the city reaching a near record high of 112 degrees. Kim, Janet, and Jackie sweated it out inside the church with about 400 junior kids. I think it was a good thing they didn’t have a thermometer to know the actual temperature INSIDE the church as it tends to rise a lot with so many little bodies packed like sardines into a little space! Elizabeth and I had it a little easier as we were outside under the shade of a tent with our senior class. (By the way, young Elizabeth just graduated from Cedarville University with a degree in music. I mention this as her graduation day was not spent “walking” in her graduation gown but “arriving” in India for the children’s ministry! May God bless her commitment to serve Him!) There was some potential for conflict when a Hindu lady came to the CBS with anger over our presence, complaining that what we were doing was illegal. Once again, we appreciate your prayers and God’s protection. 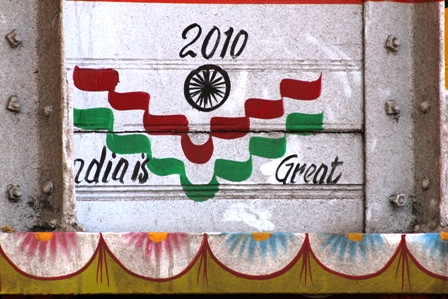 Yesterday, we were travelling to a village and stopped at a roadside rest. The sign on this road truck – “India is great 2010” – caught my attention. India is great! It is great in need, great in opportunity, and great in potential. This is my sixteenth trip to India and there is still so much about the country, its culture, and people that I don’t understand. But I do know that my heart aches for the crippled, the homeless, the poor, the castaways, and especially for the lost. I struggle with the “whys” and the “whats” of being here. Why do I get to have such a fine life AND go to Heaven while so many here suffer severely and will soon die and live forever in darkness and torment. My opportunity is over for this year, and yet there are nearly a billion people here still without Christ. I want to go home and melt in my husband’s arms but in doing so, feel like I am deserting a lost and dying people. India is great, but the Lord Jesus Christ is the greatest of all. He has opened up for all of us the throne of grace and invited us all to come boldly before Him in prayer. This is an opportunity that never comes to an end. Prayer does indeed move the Hand that moves the world. Please join me in praying for the people of India, for its children, and for its spiritual future. May God’s Hand stir their hearts to know and serve Him!

Please pray also for Pastor JF and his wife, Aruna. They have an extensive and intense ministry here in India and need our prayers. Pray for their sons, Joshua and Caleb. They are fine young men who are both studying and preparing for their own ministry in the future. They dedicated three weeks of their summer vacation to helping us in every way imaginable. This family showed us the love of Christ in so many ways, always with patience and a cheerful heart. I will try to get pictures and names of the village pastors out to you soon so you can be praying for them as well.

Once again, thank you all for caring enough to pray, support and help in so many ways!