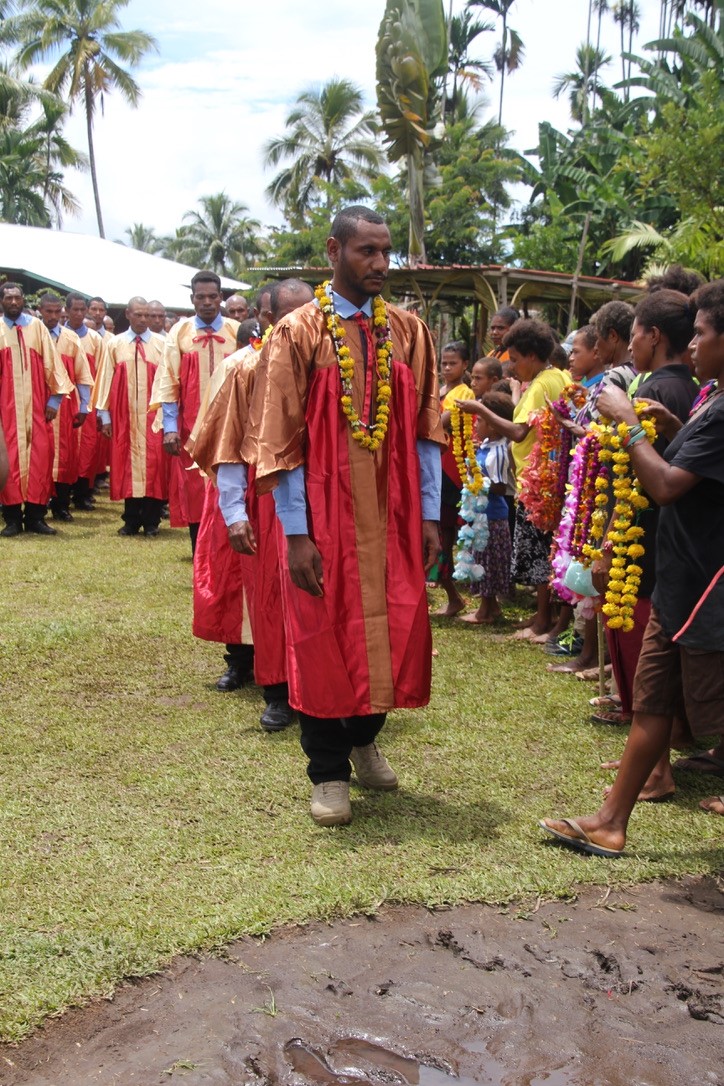 Today, we graduated the seventh group of Ese Bible Institute students. What a great day of celebration and giving of honor to the Lord Jesus Christ for what He has done in the lives of these students! It is impossible to share the entirety of the ceremony with you but we will attempt to give you an idea of the richness of the day through sharing some selected quotes.

There were 32 graduates, who proceeded into the church that was beautifully decorated for the occasion. The theme of the graduation day was taken from Philippians 4:9:

“Keep on doing the things you have learned, and received and heard, and saw.”

The ceremony began with remarks from Dr. Bryan Tieba, representative of Higher Education in PNG. He spoke of the sacrifice and love that Jim and Jaki Parlier showed as missionaries to the Managalasi people. He said, “Jim and Jaki lived here with us, they ate our food, walked our trails, slept in our houses, played with our children, and lived our life. Jim had a dream to see the Word of God established here on the plateau and around. You students are the fruits of Jim’s dream.” He then encouraged the students to go out and use what they have learned to give others the hope that is only found in Jesus Christ. He ended with this challenge, “This is a hopeless world, full of sin and corruption, but you have the Light of Truth to share with this world.”

The next speaker was a Major Chaplain from the PNG Defense Force. He is the spiritual leader to the PNG Army and a strong believer in Jesus Christ. The Major passed on greetings to the students and attendees from the Brigadier General of PNG Defense Force, who has declared that each member of the PNG army should put their faith in Jesus Christ, and put God first in their lives. One of the past graduates of EBI, Taylor Tioja, has been ministering among the PNG Defense Force through teaching and the distribution of Bibles, Basics books, and other biblical materials. The Major thanked the school for the blessing that they have been to the Defense Force. He said, “Ese Bible Institute has blessed the PNG Defense Force, now it is our turn to bless Ese Bible Institute.” The tenets of the PNGDF are fitness, discipline, and professionalism. He encouraged the students to live as Christian soldiers in this world, displaying those same qualities in their spiritual life and ministry.

Pastor Joshua, pastor of a local church in the area, then brought some encouragement by recalling the condition of the village when the school began in 2004. He said, “Fourteen years ago, this place was divided. There was no unity and the churches were fighting one another. When the school came, people began to come together. Churches began to work together. This school became a place of unity where people worshipped together to give honor and glory to God.” He then gave direct exhortation to the students, “Graduates, you are trained to be ambassadors of God … you are trained to bring people to their destiny and to their God. Stand together and work together for the good of our people, to bring them to eternity, to bring them into the Kingdom of God.”

Gene then gave the final address to the students, exhorting them from 2Co 5:14–21. He asked the students to take one final exam with him by answering the following questions from the passage:

• Does the love of Christ control you?

“For the love of Christ controls us, having concluded this, that one died for all, therefore all died; and He died for all, so that they who live might no longer live for themselves, but for Him who died and rose again on their behalf.”

• Do I see others through the eyes of Christ?

• Am I going to be the hands and feet of Christ?

• Do I know the message?

“He made Him who knew no sin to be sin on our behalf, so that we might become the righteousness of God in Him.”

The ceremony ended with testimonies from several students and the passing out of diplomas. As each graduate received their diploma certificate, family members would come and hug them, and bless them with a garland of flowers or a string of native beads and shells.

Following Graduation Day, a new intake of 59 students began their initial course in Bible Study Methods, taught by Logan Carnell. At the same time, Gene taught a group of about 60 graduate students of former classes from the book of Jonah: Principles of Personal Evangelism.

After the church was cleared of the adult students, Nan had an opportunity to do VBS with a big batch of village children.

Next week, we will hit the trail toward the coast with Pastor Thomson and Chris, and visit five or six villages to share the precious message of the Gospel and instruct those who are already believers in a further understanding of God’s Word. We are so encouraged by the spiritual transformation in this remote area of PNG through the Bible Institute and its students. Thank you for the part you have played over the years through your prayers and support. God is faithful!

Please continue to pray for us.

From the jungle with love,