“I will instruct you and teach you in the way you should go. I will guide you with My eye.” Psa 32:8

This was our quandary as we decided to leave Ecuador. Following the conferences in the foothills of Tambogrande, the jungle of Saramiriza, Peru, and the mountain town of Loja, Ecuador, which were well attended and wonderful in the response of the people, we wrestled over the decision whether to remain in Ecuador or depart for home.
This was due to an invitation by a pastor who attended the Loja, Ecuador meetings. In two weeks’ time, he would be gathering with approximately 3,000 indigenous Christians for three days of meetings in a rented stadium. Could we attend and provide teaching? That was his request. My immediate thought was, no way do I want to miss this! However, we spent two days, resting in Cuenca, Ecuador (our journey involved nine full days of travel by plane, bus, van, and four-wheel drive trucks), praying and seeking guidance from the Lord. In the end, contrary to my inclinations, we concluded it was time to go.
Not until after takeoff from Cuenca were we informed that Ecuador’s biggest volcano, 19,300-foot-high Cotopaxi, which is covered in ice and snow, was sending plumes of smoke and ash five miles into the air. All flights, including ours, had to detour 100 miles to safely miss the ash. Ecuador was under a state of emergency. Preparations were being made to evacuate many towns and villages in the event of a full eruption. One of those towns in the potential path was Garaunda, where the indigenous gathering was planned. Whether the volcano will blow, and/or that gathering will be postponed or the location changed, we do not yet know. We hope—by God’s grace—to attend this indigenous mission next year.

After the two previous conferences, it would be difficult to anticipate a better one, but Loja was off-the-charts, response-wise! About 60 pastors, leaders, and teachers attended. We distributed copies of The Basics in Spanish, and the teaching was an overview of the book. We were hosted by Pastor Carlos Luscando, leader of the ministers’ alliance in Loja. His team of church workers provided breakfast and lunch, probably the best meals ever served at any conference. We thought we were in a gourmet restaurant enjoying fine dining!
We were informed during the conference that the attendees kept asking, “How are they able to come to us free of charge, even providing free books and materials, and supplying for the food? Do you think they are supported by the government?” When we told them that we represented faithful believers in America and Australia, who gave voluntarily so that we could come to them without charge, they were amazed. How we thank God for all who give and pray to make our ministry possible! Because of you we are able to boast with the Apostle Paul, “What is my reward then? That when I preach the gospel, I may present the gospel of Christ without charge, that I may not abuse my authority in the gospel” (1Co 9:18). “I preached the gospel of God to you free of charge … As the truth of Christ is in me, no one shall stop me from this boasting …” (2Co 11:7, 2Co 11:10). Because of so many faithful supporters, we also were able to boast on your behalf of the grace of God demonstrated through your prayers and giving! 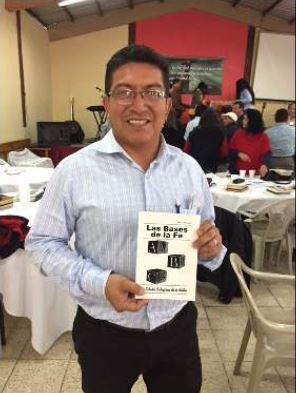 The interest of the students was evident from the start, and questions during the Q&A sessions were thoughtful, relevant, and serious. We noted during break times that many of the students were pouring over The Basics book, discussing the contents with one another. The atmosphere of spiritual hunger, mutual respect, and reverence for God’s Word was so stimulating to me as a teacher. Seldom have we ever found so much unity and consideration demonstrated—and this coming from representatives of 27 different churches. At the end of the conference, we were presented with a beautiful plaque from the Evangelical Christian Fraternity of Loja, for “The Labor of Beneficial Ministry to the Churches of Loja.”
We also enjoyed an evening visit to a training center where we met with about 25 students of Mark and Nube Vogan. Mark is a missionary from Ireland with One Mission Society (OMS), and his wife is Ecuadorian. They are very active in Children’s VBS programs and church-planting in one of the poorer areas of Loja.
My sister, Cindy, accompanied Nan and me on this mission as out translator. Having worked as a missionary in Mexico for most of her adult life, she was an enormous help with translation and knowledge of the Latin American culture. In addition, because she spoke the language and is trained as a Christian counselor, she was able to encourage and give help to many along the way. We thank God for her willingness to serve Christ with us and ask that you pray for her. She has recently moved back to Mexico and is praying for an open door of ministry. Cindy loves to serve Jesus Christ by serving others!
Our thanks go out to Julio and Betty Elias, our representatives in South America. Julio is the one that God directed to make contact with the believers in Loja and made all of the arrangements for our journeys and conferences. Julio and Betty accompanied us every mile of our South American journey, and we count it a blessing to be co-servants of Christ with them. We were able to bring their children, Olga and Ewerthon, along with us to Loja, allowing the family to have somewhat of a vacation in between times of ministry. Please continue to pray for Julio and his family, especially for Olga as she is looking to the Lord to provide a way for her to attend university.

It was suggested during the conference that a printing of The Basics be done in Loja, so as to meet the needs of a multitude of outlying churches who were unable to come to the conference. We were assured that many opportunities existed for outreach to remote churches and congregations in the surrounding mountain regions.
We also intend, barring the possible soon return of our Savior, to attend the indigenous gathering next year, with time for better planning and preparation to meet with so many believers.
The conference in Loja was a wonderful exclamation point to an extremely fruitful and productive journey. When we next visit Saramiriza, we have requests to travel by river to some of the jungle churches. This, included with visits to remote churches in Ecuador and the indigenous gathering, will require a visit of two to three months. These are the plans, should God allow our return to Peru and Ecuador. In the meantime, please join us in prayer for these precious fellow-believers. A prayer list follows so that you can ministry further to the saints down south.

For more pictures of the Peru/Ecuador mission go to:
www.dropbox.com/sh/msr5hhky6isojp0/AAA8eBRu_6HdfaUY01ueTwena
In the love of Christ,
Gene and Nan
Basic Training Bible Ministries2015-08-25T00:00:00-04:00
Go to Top