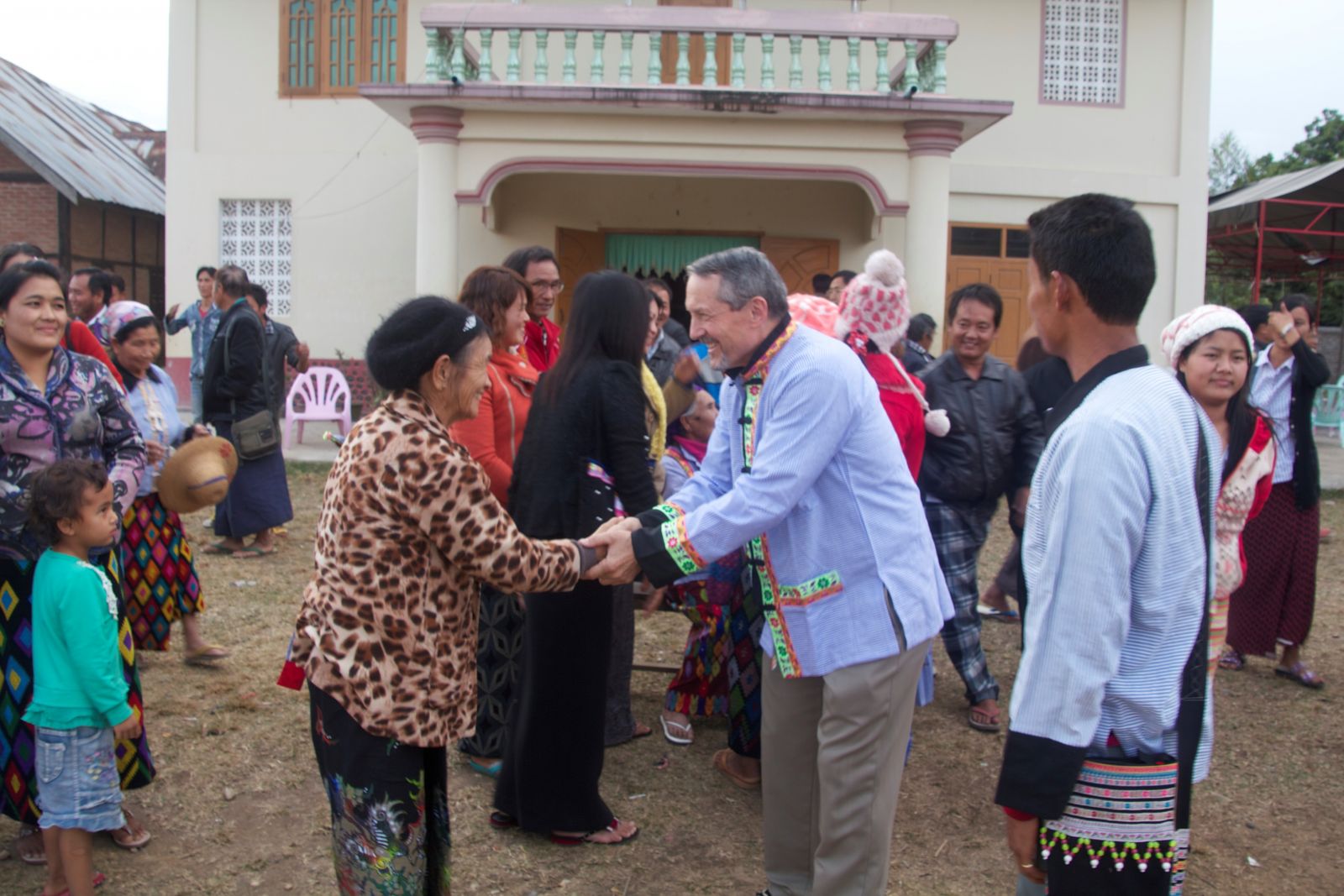 The Greatest of These is Love

It seems that our lives are filled with many expectations, and that the realities seldom measure up to our anticipations. We tend to live in a state of eagerness as we look forward to some event or achievement that is on the horizon. It may be the hope of a raise in pay, the development of a new relationship, or the acquisition of some new product or possession.
However, when the time comes, and the desire is fulfilled, there is often a lurking sense of disappointment. Even when our “plans” work out, they do not seem to bring the expected sense of accomplishment for which we had hoped. Or, if the initial glow of attaining our goal is all we anticipated, it all too quickly begins to fade.
This is where we might begin to compare our expectations in life with the unexpected surprises along the way. I have been thinking along these lines recently, in light of events that took place on our recent journey. Travel around the world—especially to “off the beaten path” places—is always full of the unexpected twists and turns. I well remember saying to a young man who accompanied me on my first mission to Africa, as the plane was taking off, “Expect the abnormal to become the normal.” Quite frankly, this is one of the things I love about the life God has granted to us.
I have discovered that none of my anticipated or expected goals ever quite measure up to the exceptional and exciting things that come to us in complete surprise and leave us with a sense of wonder.
During our recent travels in Asia, Nan and I were invited, at the last minute, to attend the “wedding anniversary celebration” for our translator. He and his wife were celebrating 24 years of marriage. We just had a few minutes to get ready—then were off to the celebration.
When we arrived, we found this fine gentleman and his wife with a houseful of students who had come for a Bible study. As we were being welcomed, I was informed that after a brief testimony by our host, I would be presenting a message relevant to the celebration of their marriage! This has occurred many times over the years, and never without a sense of complete “mental block” of what to offer. However, I have never, ever been put in such a last-minute situation without, usually at the last moment, being given a clear scriptural course to follow. And with Nan backing me up in prayer, just as I stood to speak, two passages came into alignment, in a way I had never before seen.
I first took up Gal 5:22–23, presenting the conviction I hold that “love” is the fruit, and all the following terms are descriptive of its nature, quality, and effects. This led me to contrast “natural love,” which always has elements of self interest involved, and “spiritual love,” which is selfless and sacrificial in every way. In the love of Christ, the subject denies self (Luk 9:23), so as to love the object unconditionally and without qualification.
I then turned to 1Co 13:4–8 and immediately saw the passage in a new light. In the sixteen descriptions of love, eight are positive while eight are negative. This I had known, of course. What struck me was that Paul was contrasting “natural love,” using the negatives, with “spiritual love” (the love of Christ), using the positives. This contrast makes identifying the love of the Spirit all the more clear.
Natural love, which all mankind is capable of, is “envious, self-promoting, proud, rude, self seeking, easily provoked, inclined to evil, and rejoices in iniquity (that is, the perversion or distortion of God’s perfect standard of love). This definition gives a clear picture of all the limitations of love on a purely human plane.
To the contrary, Paul lists eight positive qualities of divine love, which “suffers long … is kind … rejoices in the truth; bears all things, believes all things, hopes all things, endures all things … never fails.” In this list, we see the supernatural quality of love as inherent in God’s nature (1Jo 4:8, 1Jo 4:16), expressed through the sacrificial life and death of Jesus Christ, and now produced by the Spirit of God through the Spirit-filled believer.
Many other thoughts and conclusions raced through my mind as I spoke to the guests of this fine man and woman. They are far too many to relate here. But it was one of those rare times when I wished I could be taking notes at the same time I was speaking. It left me with a deep gratitude for the many who have shown the love of Christ to me through my stumbling spiritual journey—the greatest of these being my dear lady, Nan. And I have been in a state of reflection since, almost an ongoing meditation, of the wonders of God’s unexpected gifts and blessings in life.
This whole process has left me with an excitement and expectation which I have never consciously entertained. That is, the eager anticipation of the unknown and undefined surprises of grace, blessings, provision, and wonder that God has planned for me, and for each of us, as we continue to learn by faith, live by hope, and discover the riches of the love of God. Truly, “the greatest of these is love.” As much as the love of Christ through others is an undeserved blessing, it still cannot compare to the expressions of the love of the heavenly Father for us, and which always come as a surprise—often in the most unexpected and unlooked-for ways:

“Oh, the depth of the riches both of the wisdom and knowledge of God! How unsearchable are His judgments and His ways past finding out! For who has known the mind of the LORD? Or who has become His counselor? Or who has first given to Him and it shall be repaid to him? For of Him and through Him and to Him are all things, to whom be glory forever. Amen.” Rom 11:33–36

A Word about Ambiguity

During WWII, it was common for the war correspondents to sign off their dispatches with words like “somewhere on the western front” or “somewhere in the South Pacific.” It was understood that information regarding Allied Forces, troop movements, and geographical locations was sensitive material that could—in the wrong hands—be used by enemy forces.
With recent revelations about our own country’s spying on all communications (this includes all phone and Internet conversations), not to mention the massive amount of hacking going on, details regarding mission activities are now potentially dangerous. The U.S. government is becoming more and more ravenous for revenue, and increasingly more hostile to funds being sent out of the country. Other nations already have agencies set up to troll the Internet to find out what Christian activity is taking place, along with when and where.
It is a simple thing to go on the Internet and type in “Christian mission to Tanzania,” or something similar, and have many churches and mission organizations come up listing when, where, and with whom they are working. We have already had the experience of arriving in-country to have the police arrive at our location, having seen our “prayer request” which went out on the Internet. Due to the increasing hostility to Christ and His Word worldwide, we have chosen to sign our mission reports and prayer letters “somewhere in the East,” or the equivalent.

Our recent journey proved to be one of the most well-received and productive we have ever experienced. The attendance, though in difficult areas, was double or more that what was expected. We held two Bible conferences in quite different locations. The first was in a more remote area, the second in a large city. The students were eager to learn and overwhelming in their gracious welcome of us.
Those attending were indigenous pastors, missionaries, and church members. In our first conference, the most common response (which we heard repeatedly) was, “Please come at least once or twice a year. We do not have this kind of teaching available, and we need it.”
In our second conference, a pastor from a Charismatic background said, “When we preach, we just say whatever comes to our mind. But you have spoken only from the Bible. We need to learn to do this.” Another pastor said, “We have many foreigners come to teach, and some have good things to say; but when you teach, you inspire us in every class.” One especially gratifying moment was when we met a member of an army of freedom fighters, who informed us that the Basics book (translated into their language) was in high demand by all of the officers, who were using its principles in their training, and requesting that we print more.

My topic was on the typical meaning of the Tabernacle. When we arrived, I heard that several studies had been done on this theme, and I wondered if I had chosen the wrong subject. However, many came up after class to say, “We have studied this topic before, but you have shown us many things we have never seen before.” This kind of feedback is always encouraging and leads to an overwhelming sense of my privilege at being blessed—not only with the joy of teaching, but also the blessing of having sat under so many great Bible teachers. 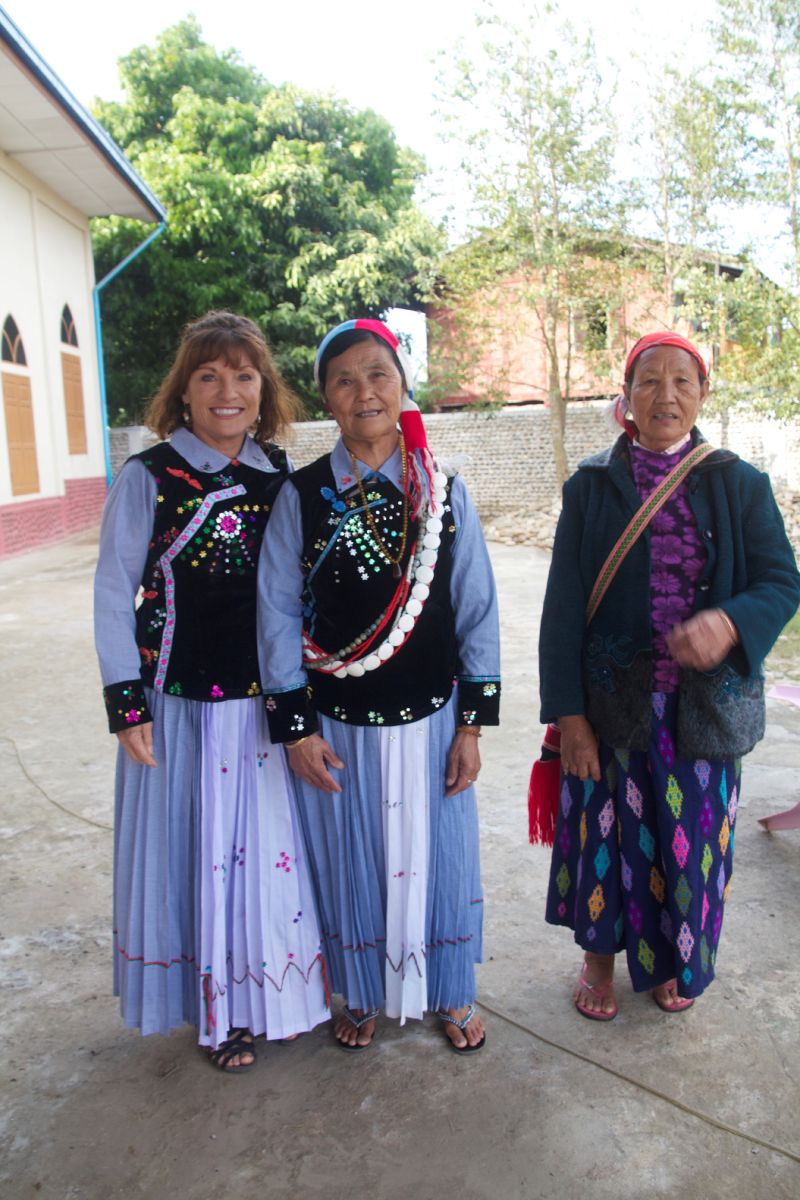 In addition to the teaching on the Tabernacle, Nan was able to do some daily classes with the ladies. We also set one day aside to co-teach through the Book of Ruth with an emphasis on using the “one another” principles from God’s Word in the context of marriage. I taught the parts on Boaz, and Nan taught the parts on Ruth. It was a lot to tackle in one day, but we enjoyed it!
Here are some prayer requests from our journey:
• Thanksgiving for safe travel and effective ministry
• That God would guide us how to proceed in future work in this location
• For provision to reprint the Basics in two different languages used in this location
• For our helper in country, “Robert”; he is facing some family struggles
• For Grace of Heaven orphanage, Priscilla, Isaiah and the children
• For Pastor John who is teaching through the Basics
• For teachers John W., Paul, and Timothy
• For Moliet who is building a new church
• For David and his wife who are taking in orphans and sharing the love of Christ with them
• For greater unity among some of the tribal churches
As we were leaving Asia, we sent out a short email asking for travel that was free from hazard, delay, and cancellations. God granted that prayer with an additional unexpected surprise: When we boarded the plane to fly from Hong Kong to Los Angeles, they took our economy boarding passes and handed us boarding passes for Business Class—free! We felt spoiled, but thought how typical it is of the Lord to sometimes answer prayer above and beyond what we even ask. So, thanks for praying—we definitely enjoyed the fruit of that one!
We are always mindful that we could not do what we do without each one of you who give and pray to make it possible. You cannot know until eternity the extent of your impact and the rewards you will share! Thank you!
Lavishly blessed in Christ,
Gene and Nan
Eph 1:7–8
Basic Training Bible Ministries2015-01-10T00:00:00+00:00
Go to Top