Greetings, prayer warriors and supporters,
I apologize for the delay in sending out a report on our recent ministry in Africa. Since returning home, we have had some big problems with our computer server company hindering our response to emails and other communications. Furthermore, I have been trying to assimilate all that we were able to see and do and it is difficult to summarize it all into a manageable report. Therefore, my report will probably come in segments as various aspects of the amazing journey come to mind.
During almost six weeks in Africa, we visited South Africa, Zimbabwe, Mozambique, and Zambia. We travelled by plane, bus, four-wheel drive, and on foot. We were joined in Zambia by Geoff and Sabine Badart from Cross Road Bible Church in Perth, Australia. They participated in the most difficult and trying part of the journey. Their flexibility and patience in the face of many trials—not to mention a week of illness for Geoff—was outstanding! We camped in tents, travelled tracks that were extremely rough, suffered four flat tires, three vehicle breakdowns, and watched as our great and mighty God demonstrated His faithfulness time after time. I will try to report on it all in the near future.
First, however, I want to introduce you to the real heroes of our mission in Africa. We worked with two main pastors: Kenneth Mawire in Zimbabwe, and Happyson Mwashamputa in Zambia. I have known both these men for over ten years, and visited them before, but never got to know them as I did during this mission. They are each overseeing many churches in several different countries, and each are concerned about the training and equipping of the pastors under their care. In getting to know these men better, I have a great desire to share something of their stories and ministries with you, and to become more involved in their work—as our Lord supplies and guides. For this report, I want to focus on Pastor Mawire. 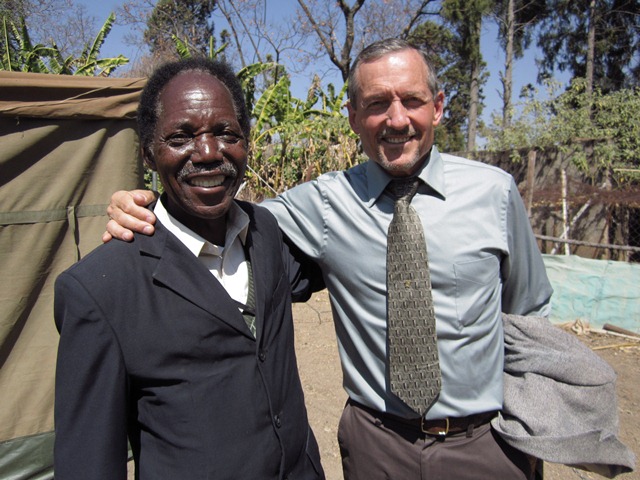 Ken Mawire is a living legend in the Christian world. Though relatively unknown to the world at large, his story needs to be told—and if God permits—I hope to write a book on his life. His faith, courage, and sacrifice need to be known for the value they have in challenging believers in the West to a life of faith and service.
When missionaries first began coming into what was then Rhodesia, they were given a place to live by his parents. Through the ministry of one lady, Ken became a believer during a Sunday School class at the age of twelve. He said at that time, God put the message of the Gospel deep into his heart. As a young man, Pastor Mawire began to proclaim the Good News at every opportunity. These were difficult times in Rhodesia as revolution and civil war overtook the nation. From the beginning, he determined that his total focus would be presenting the Gospel to all men—regardless of which side they were on. His task was not to take sides, but to present Jesus Christ to all men, and to call them to faith. Throughout those troubled years, and later in the terrible civil war that racked Mozambique, Pastor Mawire sought out the most needy areas—which meant the most dangerous areas—to present Christ. Often hunted and hounded, for a time living in a cave, several times arrested or taken captive, destined for the firing squad, he never lost his focus of pointing men to Christ. Once, riding on a bus with his wife Grace and their two daughters, the bus came under heavy attack. In the end, only those four survived out of the 65 passengers.
Throughout his long and fruitful career, he and his dear wife have known great heartache and sorrow. They lost both their beloved daughters—one dying of disease, the other being attacked and killed by a pack of feral dogs. Then, the son of one of those daughters was hit by a truck and killed. In each of these and many other sorrows, Ken and Grace have sought and found the comfort that is in Christ. I will never forget, as he told me of these things, when he looked at me and said, “When I felt the deep sorrow of these losses, then, I remembered the ‘great sermons’ I had preached at the funerals of grieving loved ones, how I had spoken such great words, but without a heart of compassion, and I learned how to ‘weep with those who weep.’"
Now at 82, this energetic, kind, and wise man, along with his wife and three sons (one of whom was recently beaten, robbed, and run over by his attackers) are reaching out throughout Zimbabwe, Mozambique, and surrounding nations—evangelizing, training, and encouraging the saints. During our time with him, we held two conferences—one in Harare, Zimbabwe and the other in Gondola, Mozambique. We were also privileged to visit three remote village churches in Mozambique; the believers there were so hospitable and kind to us. Several times we heard the statement, “We never thought this day  would come, that we would have visitors coming to see us from America.” We, on the other hand, felt so privileged to spend a short time with these dear, humble, gracious saints.
I will write more on Pastor Mawire’s work, and also tell more of Pastor Mwashamputa in Zambia and his work. Both these men are constantly enduring hardship, along with their families, to make the claims of Jesus Christ known to their world. I will be devoting much more time and effort working with these fine men in the future. Please pray for plans to host training seminars for pastors and leaders in these two countries. In both of our conferences, we had pastors who had come from surrounding countries, and we are sure such training will have widespread impact. There is much more to report and much to do as we prepare for greater service in these areas. I will try to send another report soon.
In the meantime, please pray for our upcoming conferences here at home, and remember Cody and all our service men and women on the front lines. May God use the fires of combat to bring many to a saving knowledge of our Lord Jesus Christ, and use those who are believers to be his spokesmen!
For more photos of our trip please go to this link. https://picasaweb.google.com/103624950818220662523/AfricaFacesAndPlaces2011?authuser=0&authkey=Gv1sRgCKzdj8OcnPjedA&feat=directlink
Until next installment,
Gene and nan
Basic Training Bible Ministries2011-08-15T00:00:00+00:00
Go to Top